A collector talks about his garden 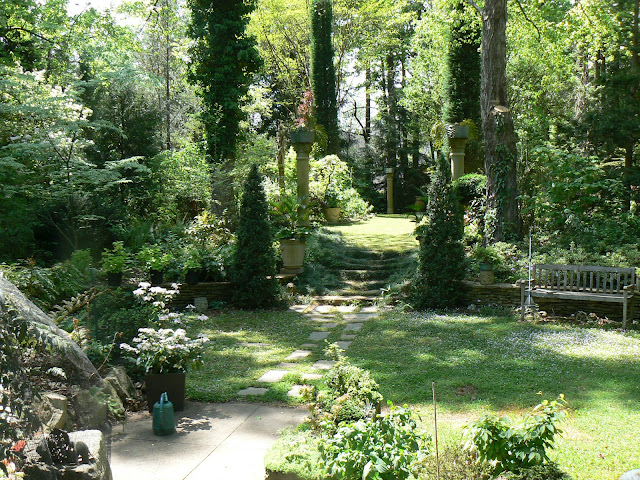 Yesterday, Kathryn MacDougald and I went for our annual tour of Ozzie Johnson's garden.  Ozzie is one of the three plant hunters we had hoped to feature in an adventure series about searching for ornamental plants in the world's most dangerous and beautiful regions.  We may yet get our show when people have seen enough alligator wrestling and tuna wars.

For plant lovers, Ozzie's garden is a paradise.  There were so many wonderful things going on - plants he's hybridizing or growing from seed collected in China or Vietnam or shrubs he's brought from nurseries in Japan to introduce to Americans.  I was so overwhelmed that I had to lie down for an hour when we got home.  I was exhausted from all the excitement and the thrill of knowing that lots of new and wonderful plants are coming down the pike.

I guess it's been over 20 years since I first went to this garden.  I remember the weeping katsura tree wasn't much taller than I was.  Now, it reaches forty feet into the air.  You could have a picnic under its curtain of leaves.

This tree brings up a confession I need to make.  I am a regretter.  A bad one.  I constantly dwell on the plants I didn't buy when I first knew about them.  Like the katsura tree.  Or, the 'Graham Blandy' boxwoods Ozzie has.  I saw them for $11 each - this was also 20 years ago - and walked away without buying any.  I thought they were too little for the price.  Ozzie's are probably eight feet tall and make the most beautiful green columns.

As we walked around, looking at his collections of weeping and fastigiate trees (have you ever seen a 20 foot tall, narrow flowering peach with burgundy leaves?), I was mesmerized.  A new dwarf weeping redbud called 'Ruby Falls' had leaves that are coming out almost red.

And, he had all sorts of plants that aren't normally variegated or chartreuse or burgundy.  There was a golden Vinca minor called '24 Karat' and a new lacecap hydrangea he's working on, 'Lemon Ice', which has lovely chartreuse leaves and pink flowers.  He also has a spectacular yellow leaved Hydrangea quercifolia next to a burgundy Japanese maple.

I could go on and on, but I'll show some of the highlights in future posts.  For now, in the photograph above, note the tall, dark green column center-left towards the back.  That's one of a pair of Leyland cypresses that Ozzie has been clipping for years.  The one on the right is getting its annual shearing right now.  I don't think Ozzie has ever done anything - including impaling himself on a bamboo stake on the side of a high mountain in Vietnam - as dangerous as his getting on such tall ladders to trim these Leylands.  They are really cool looking, though.  You can see them from about everywhere in the garden.

Ozzie is a true plantsman.  He's an explorer of the wild, he brings back seeds and grows things out and tests them for years for hardiness and desirability, he makes crosses to get an even more wonderful plant and then he finally gets them into production and out into the market for gardeners.

I was whining about the fact that I hadn't planted all the things I knew about way back when.  I just feel so overwhelmed by what I didn't do, I said.  Ozzie's reply:  "What if you had thousands of plants in the ground and in pots and flats, and all of them needed something - pruning, watering, transplanting?  That's what I call feeling overwhelmed."

He does have a point, but I still wish I'd planted a weeping katsura and had bought at least two of those boxwoods.
Posted by Martha Smith Tate at 5:07 PM No comments: