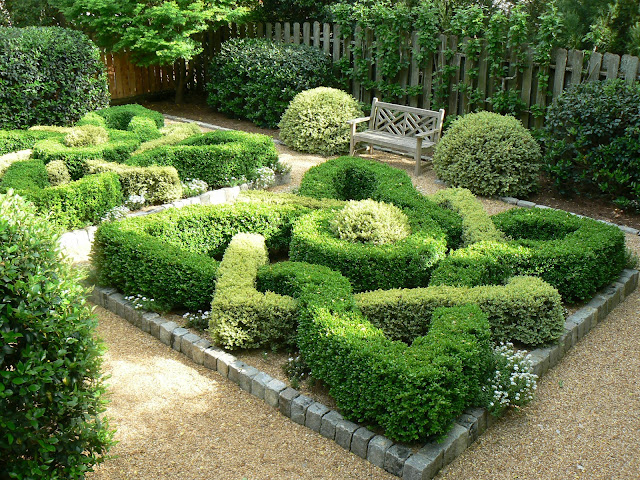 For two decades, in the 1980's and 1990's,  Rosemary Verey (1918-2001), English garden designer, lecturer and prolific garden writer, spent a good deal of time in the United States.  She gave talks in many cities, interviewed American gardeners and wrote books about them and even did design work for private citizens and public places like the New York Botanical Garden.

Barnsley House, Mrs. Verey's home in Gloucestershire, was one of the most visited gardens in England when she was alive.  Her famous laburnum walk is in just about every book I have on English gardens and is on the cover of at least one.  She is credited with making the French potager popular and was known for adapting elements from large public gardens and bringing them to scale for home garden use.  Among her British clients were Prince Charles and Elton John.

When Mrs. Verey came to Atlanta, she often stayed with my friend and sometimes tennis partner (she was the forehand, and I was the backhand), Mary Wayne Dixon.  Mary Wayne has been a trustee and active volunteer for the Atlanta Botanical Garden since it was created.  She's been on countless garden trips abroad and in the U.S., and has a great appreciation for plants and garden design.

I posted a photograph yesterday of a scene from Mary Wayne's front entrance garden.  The above photo shows her knot garden, one of Mrs. Verey's designs.  The all green and variegated boxwoods grow on the site of a former irregular-shaped swimming pool, which the family no longer used.

After I sneaked into her garden on Saturday, I came home to read something that ruffled my feathers a bit.  I know that Mary Wayne had wanted a knot garden for a long time, but only recently had the work done.  For her, it is a reminder of a good friend and mentor, and she is ecstatic with the results.  So, when I read one critic's opinion that knot gardens are "so 90's" and that Mrs. Verey's aesthetic is passe (I don't know how to put an accent on that final e), I was sort of irritated.  That may be true, but it's not like everyone has the resources or the desire to follow every garden trend.  I like many different gardening styles (although when they tried to say that the "new American garden" consisted of waves of grasses and black-eyed Susans, that wouldn't do for me) and admire some of the edgy work being done by younger designers.

But, I'm probably stuck in the last century because I still look at Mrs. Verey's books about the gardens at Barnsley House and admire all the alliums and the clipped hedges spilling over with flowers.  It's an aesthetic I like, and it was a grand achievement over a half century (the house was bought from Mrs. Verey's son and has now been turned into a hotel).

One thing is for sure.  Mary Wayne's back garden is lovely and peaceful and suits the style of her house and furnishings.  It also looks good all year long.  I feel if we're lucky enough to be entrusted with a spot of land, we should do what makes us happy, trendy or not.  I think of the woman in my hometown who has about every whirligig you can think of in her front yard.  You might say she's "so 50's", but I'm sure she's delighted with the way it looks.  And I think that's the way it ought to be.
Posted by Martha Smith Tate at 5:57 PM 2 comments: