I know it's broad daylight, but... 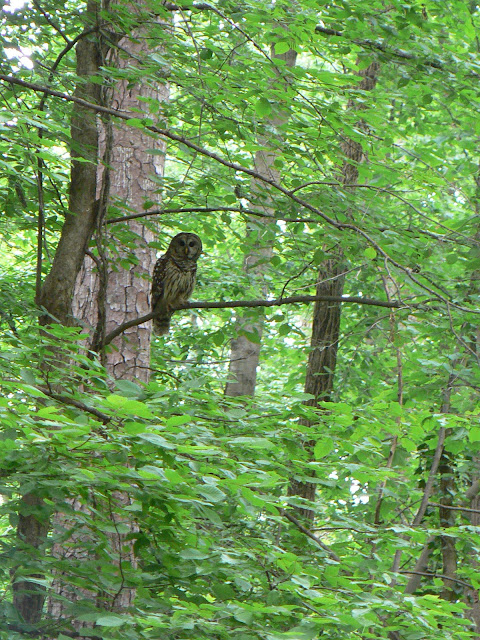 I could write a book about the barred owl goings on around here.  I used to hear a loud clucking sound, and inevitably I would see an owl soon after.  I finally learned that he was sharpening his beak (I hope this is true; someone told me that).

One time, I saw a pair sitting on a limb with their heads together, like lovebirds - way before the day you had a convenient camera on your phone to seize the moment.

Another time, a couple of skinny young ones had flown from the hollow, across the driveway in front of me to a high limb on the other side.  I watched as their new downy feathers drifted down.

Sometimes in the mornings, I'd walk out and feel something watching me.   Sure enough, there he (she?) was, sitting on the crook of a young hickory tree, close enough for me to see every marking.  He just looked at me, then turned his head 180 degrees to check on the noise behind him.

My late sweet dog Deion and I were walking up the driveway around twilight when I saw the owl spread his wings and dive bomb my beloved dog.  No harm done, but it did scare me.

I love listening to their calls to each other in the evenings.  The other night, I heard one further down in the woods, toward the river.  The last two years, they haven't been hanging around so much.  I hope they'll be back.

More wildlife on later posts:  No pictures of the coyotes, though.  They're too quick.
Posted by Martha Smith Tate at 10:10 AM 1 comment: Links to this post 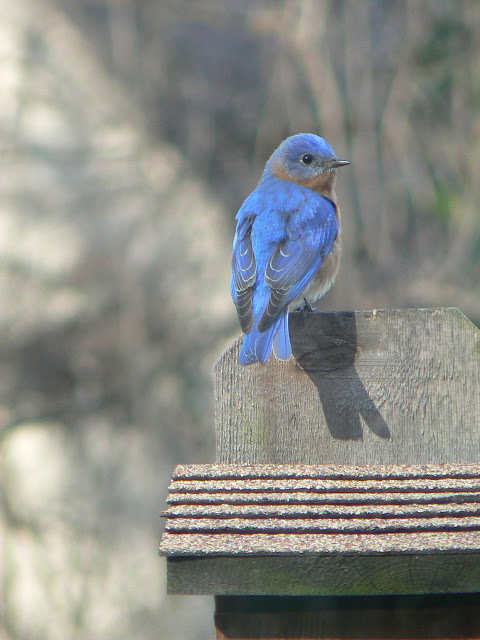 "Sorry, this one's taken."  Enough said.
Posted by Martha Smith Tate at 9:48 AM No comments: Links to this post

Is this berry any good? 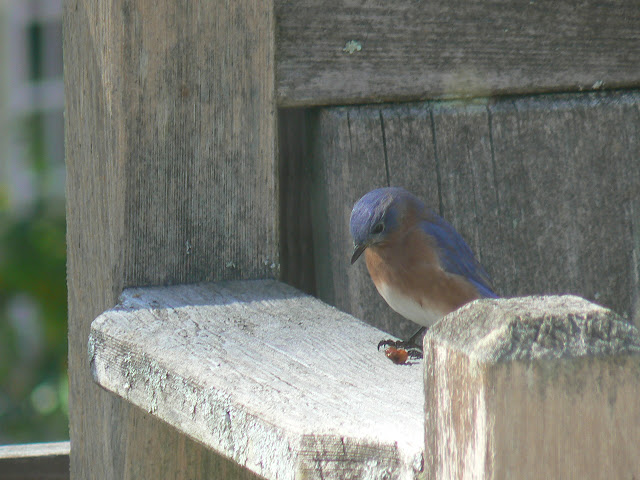 Yesterday, I forgot to publish the post I'd written.  So, I thought today I'd put in a series showing the wildlife I encounter around my house.  Just this morning, there were two hawks screeching overhead, and the smaller birds were putting up a terrible fuss.

I live in the middle of four acres of woodland in the city of Atlanta.  I've seen a lot of wildlife here, the most surprising being a wolf.  Yes, a wolf.  One night when we still lived in the little 1926 cottage at the back of the property, my husband and I were going out for the evening.  We'd left our new puppy on the deck.

Just as we were about a hundred feet from the street, we stopped.  There was a wolf standing in the middle of the driveway.  My husband said, no way, that's a German shepherd.  "Look how tall it is.  It's a wolf," I cried.  We drove on, and it ran off into the bamboo grove.  I made my husband turn around, and we put the puppy in the house.

A couple of days later, I read in the paper that Congressman Larry McDonald was missing a wolf.  His mother lived directly behind us.  We weren't the only ones who had spotted the wolf.  Others saw it, and finally someone was able to capture and return the creature to its owner.  Tragically, much later, Congressman McDonald died on the Korean flight that drifted into Soviet airspace and was shot down.

Now, to the happier photo above.  I have a bluebird box on the deck at the little house.  Here's a papa bluebird, sitting on a nearby bench, contemplating the berry he's gathered.  Possibly food for the little ones?
Posted by Martha Smith Tate at 9:45 AM No comments: Links to this post 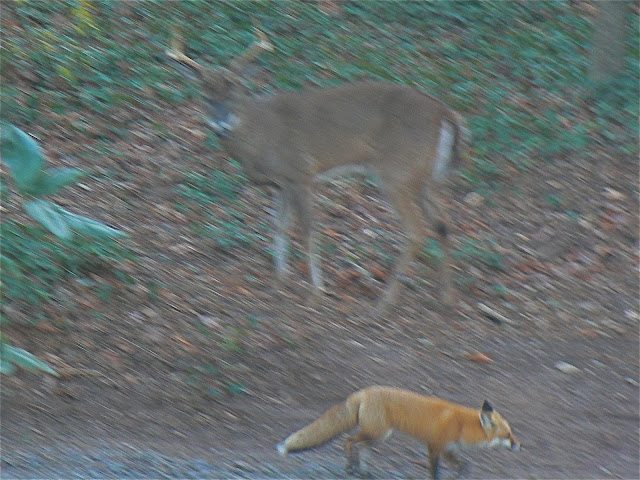 It happened the 19th of December 2011.  It was maybe nine o'clock in the morning when I looked up to see a buck looking down at something orange.  It was a fox.  The two were much closer than in this picture and standing side by side, one looking down at the other, and one looking up.  I froze.  Then I ran from the kitchen window to find my camera.  By the time I returned, here's what I was able to snap.

Seconds later, I photographed them (clearly this time), but each apart.  Was this like the lions lying down with the lambs?

The phone rang.  It was my friend Rosa's daughter.  She was crying hysterically.  I could make out that she was saying they had given her mother chest compressions, but she had died while her daughter was listening, on her way back from spending the night in the mountains. "I would never had gone," she said ruefully.  No one had figured on this turn for the worse.

I called my friend Helen, also a friend of Rosa's.  I told her about the deer and the fox.  "Rosa was telling you good-bye.  You know how she loved animals."  But, I protested, we only talked about cats and dogs, never wild animals.

A cat or dog wouldn't have gotten your attention, Helen pointed out.

I don't much believe in this sort of thing, but I don't think I'll ever look out my kitchen window and see this combination again.  Whether or not there was any meaning here doesn't much matter.  I will forever look at this picture and feel comforted.
Posted by Martha Smith Tate at 9:26 AM No comments: Links to this post