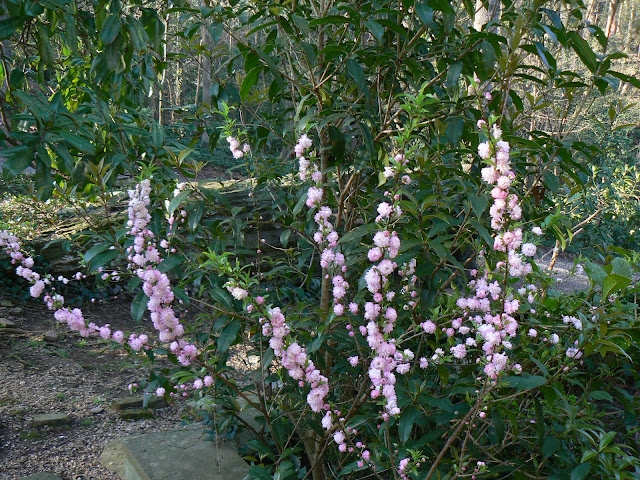 Someone asked me recently how to take care of a poinsettia fern.  I asked for a picture and received one. I honestly didn't have a clue about this plant.  Chances are, if it's a tropical or house plant, I don't know it.  It's embarrassing.  This happens more than I'd like.

I think it was well over 20 years ago that I was driving along Sandy Plains Road in Cobb County.  All of a sudden out of the corner of my eye, I caught sight of a group of light pink, spiky flowers.  What in the world?  It was too early for larkspur or foxgloves.  I was going too fast with cars behind me, so there was no way to slow down or even look in the rearview mirror.  Wow.  I would like to have those flowers, I said to myself.

It was several years later when I learned what I had seen.  I found out when a woman brought a forced branch to the Southeastern Flower Show.  Dwarf flowering almond - Prunus glandulosa.  This isn't something I knew about growing up, but later I learned that Margaret Moseley had grown both the white and pink double forms for years.

A couple of years ago, I received a call from an elderly woman.  I can't remember how she had my phone number, but she wanted to see if I could tell her what she had in her yard.  When she said it had three foot tall, fluffy pink spiky flowers, sort of like a peach tree would have, I knew instantly what she was talking about.  Again, the dwarf flowering almond.

The above plant was given to me about 15 years ago by a woman in Athens, Georgia.  A professor at the University of Georgia who wrote a book on vernacular gardens had referred me to this gardener, and I was charmed by her friendliness and by her love of flowers.  I cherish the plant, even though it is in bloom a short time.

I need to move the shrub.  It is crowded in with a gardenia I rooted, and both deserve a better home.  I think I have a place where I can plant both shrubs and have the evergreen back up the deciduous shrub.

Dwarf flowering almond is probably more of a passalong plant than one you'd find in nurseries, but I still take joy in the fluffy pink flowers.  My woody plant guru, Dr. Michael A. Dirr, doesn't think much of the plant and calls it a "bargain basement shrub of many discount stores" and adds that it appears "distraught and alone in summer, fall and winter." This is never going to be a popular plant, but for at least a week in March, I'm glad I have it in my yard.
Posted by Martha Smith Tate at 5:46 PM 3 comments: