An arrangement that's not as simple as it seems 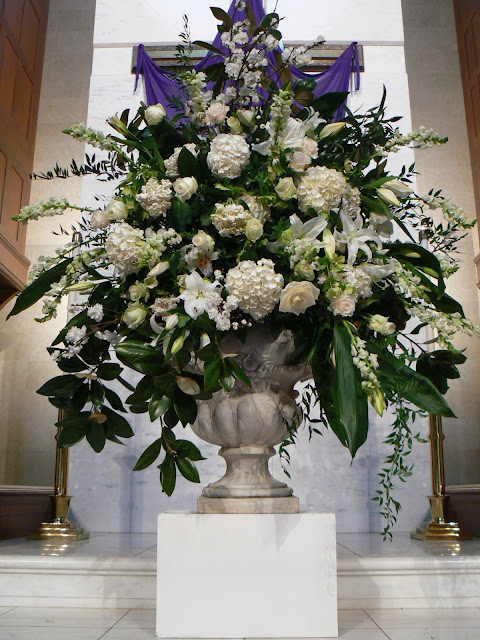 My mother used to say that I would make a drama out of anything.  I've come to believe she was right.  I  look at the photograph above, taken yesterday at church, and I don't see the lovely arrangement.  I see a dozen stories that almost ended in disaster.

The background:  Saturday night was the wedding of the daughter of an assistant minister and counselor (and author of several books, I might add).  The bride and her mother had requested our Flower Guild team, because of a friendship with Benjie Jones, who usually does the altar.

We had long anticipated what her flowers would look like, sort of English garden-y.  First, we planned to use the urn you see above.  Peggy Witt (our other arranger) discovered it in a storage room a couple of years ago, and our team has used it almost exclusively ever since.

But, about a month ago, another team used the urn and noticed water all over the marble.  They had to take their arrangement down and mop the floor (underneath the marble is the place where they hide the concert grand piano when it's not in use).  The team captain decided the urn was no good because it leaked, so she threw it away.

On that Sunday, when I got word of what had happened, you'd have thought they'd thrown my daughter  in the trash and ground her up.  I went haywire.  I called up the innocent volunteer, saying we had to have the urn back.  She called a church staff person and had all the dumpsters checked.  Apparently, the trash people had come overnight and taken the precious urn away.

But luck was with us.  The head of maintenance at the church said no trash had been collected and that the urn had to be in one of the dumpsters.  Unfortunately, it lay at the bottom of the one the cafeteria uses.  We'd had a church-wide luncheon that day so all the food waste had been thrown on top of it.  I still feel bad for the poor guy who had to retrieve it.  I know how it is to spend hours in a dumpster full of cafeteria food.  When my younger daughter got retainers, the orthodontist told her never, ever to put them on a food tray.  The very next afternoon, I was in the dumpster at her school until dark, when at the bottom of the sludge, I finally felt the wires of the expensive contraptions.

But back to the arrangement.  We ordered hydrangeas, roses, lilies and snapdragons from the wholesale place.  We also had six stems of Alexandrian laurel (Danae racemosa, which I have in my yard, but not enough to share).

But what helped make this composition so beautiful was the magnolia.  At Christmastime, Peggy discovered a vacant lot surrounded by a chain link fence.  Three large magnolias had branches that spread way out to the road, so we figured they would not be included in the "NO TRESSPASSING" sign.  We've only cut a few pieces (good for the tree to be pruned, really), but it took some doing, like standing on the top of Peggy's SUV with loppers.

The aspidistra came from Peggy's yard.  We had used it a couple of weeks ago, and had counted on using it again, but someone had thrown it away.  I pulled several pieces from a trash can full of debris.  Now I see why this is called cast iron plant.  It had been in the trash for at least a week with no water, but it was still plenty fresh.  Those are the long, broad leaves hanging down on the right side.

Then, look at the lower part of the arrangement on the left and also at the top in the middle.  That's flowering peach from the farm.  My mother planted the trees in different colors probably 40 years ago.  I'd been down there a couple of days before and knew the flowers would be perfect, but had no loppers with me.  A friend came by with some bolt cutters, so I was able to get some fluffy branches to add.

Finally, Benjie, our designer, was diagnosed with heart disease, and Friday night, before he was to create the long anticipated arrangement Saturday morning for the evening wedding, he came home from the hospital after a catheterization.  It was a close call, because if he'd had to have a stent, they would have kept him overnight, and he would have missed the window to do the arrangement.

As you can see, it all came out pretty well.  A couple of hydrangeas wilted overnight, but they were likely still fresh for the wedding.  The bride and her mother were pleased, and Benjie is going to be fine. After all, those are the things that really matter.
Posted by Martha Smith Tate at 1:06 PM 3 comments: