How daffodils made a difference 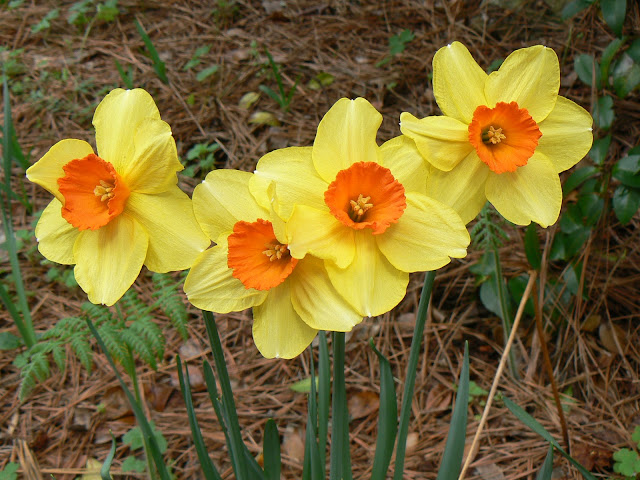 When I was young, my mother would take me to Rich's department store in downtown Atlanta.  That's where she did most of her shopping and where I bought most of my clothes.  I even got my wedding dress there, and to the great chagrin of my bridesmaids, their dresses, as well (one bridesmaid said they looked like a line of creamsicles marching down the aisle).  I defend myself in that there wasn't much choice at the time.

If you live in and around Atlanta, you know that Rich's is long gone.  But in my mind, I can still see just about every floor on both sides of the bridge.  I can also picture myself, tagging along with my mother and being almost sick with boredom and impatience as she studied the flowers in the horticultural exhibits which were held in the department store.  I particularly remember her lingering over the daffodils, because they belonged to someone my mother greatly admired - Berma Abercrombie.  Never did I dream that the person who grew those flowers would one day change my life forever.

It would take days and days for me to tell you about this remarkable woman.  The short version is that she was a charter member of the Georgia Daffodil Society and several other plant groups, and that she and another woman would regularly take all the blue ribbons at the Rich's show.  She was known to daffodil hybridizers all over the world.  She even raised special cattle because their manure was particularly good for flowers.

Many years later, when I was working for a magazine, I had this idea that I sent in to the Atlanta Journal & Constitution.  I suggested that they needed to profile the fascinating people who were gardening and specializing in certain flowers.  It would be a great way to introduce plants and get advice from experts on how to grow them.

I sent a letter outlining what I thought they should do.  As fate would have it, someone I knew had just started working at the paper and intercepted my letter.  She showed it to her editor, and he called and asked me to write a sample article.

In the meantime, my mother had told me more about Berma Abercrombie, who lived near where Mama grew up between Rico and Roscoe in south Fulton County.  I called her up to set up an interview.  I went there on a cold, windy day in late February.  As I neared her house, I started noticing daffodils growing in the ditches along the road.

Berma was a diminutive woman who suffered at that point from macular degeneration (she was in her 80's).  We sat in a cozy room in her antique farmhouse, surrounded by daffodil (more correctly, narcissus) catalogs from as far away as Australia.  While she had only some peripheral vision, she was still able to point out several types of flowers in her yard, including her beloved 'February Gold.'  She also had bird feeders set up outside a big picture window and used binoculars to watch the action.  In addition to her interest in horticulture, she was a respected ornithologist, as well.

A month later, my sample article on Berma took up almost the entire front page of the Home & Garden section of the Atlanta Journal & Constitution.  At that point, my career took a major turn, and I began what would be a 21 year stint as a columnist for the paper.  Berma's article drew all sorts of attention and brought in offers from magazines.  This all eventually led to the collaboration with two partners to create A Gardener's Diary on HGTV.

Once again, I've left out so many interesting facts about Berma Abercrombie's accomplishments (I haven't even mentioned her incredible peonies, nor the day lilies, iris and chrysanthemums she grew).  Most of the photographs I have of her yard are in the form of slides.  Soon, I hope to have these converted to digital images so I can show you more of her flowers (oops.  I have to admit that these are not her daffodils shown here).

It's pretty amazing to look back now and realize that this one person changed the direction of my life.  It is so fortunate that her nephew and his wife (yet another wonderful story) have restored the farmhouse and taken care of the land where Berma enjoyed gardening and sharing her prized flowers and her great knowledge with so many others.
Posted by Martha Smith Tate at 1:18 PM 3 comments: