The hunt for the red camellia 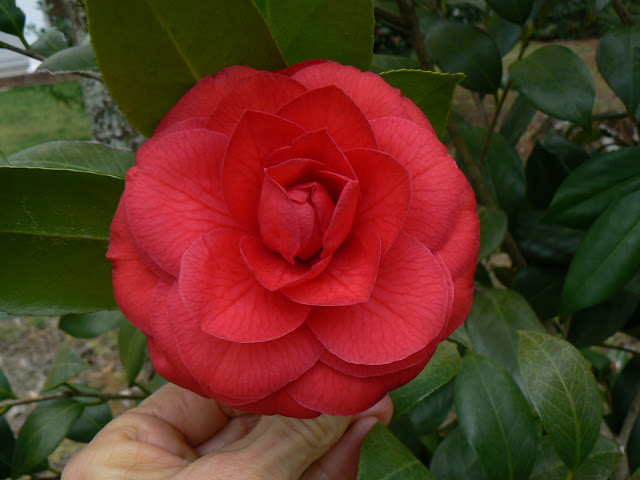 Back in the early 2000's (that sounds so weird), I went to a garden in the Tidewater Virginia area.  The owner and I were walking down this long, shady path, really more like an allee, since it was straight and rather narrow, when I stopped dead in my tracks.  There, in front of me was the reddest, most beautifully formed camellia - really one of the prettiest flowers I'd ever seen.

"I haven't the slightest idea," came the answer.  "It was given to me without a tag.  I'm not sure it even had a name.  It could be an unnamed variety."

I rather doubt that latter statement, because if a flower is that magnificent, it would have surely been selected and named.  I was disappointed, but figured I could find a similar one somewhere.

The following winter, I did see a photograph in the Monrovia catalog of a stunning, large red camellia that had to be the twin to the Virginia camellia. I was ecstatic.  But then came the let down.  You may remember  the year sudden oak death fungus was discovered in Monrovia's camellias in one of their California nurseries.  Every plant had to be destroyed.  This camellia was one of them.

But, that's the fun of being a plantaholic.  I will find that big, red-red camellia again.  A couple of times recently, I've stopped my car to see if what looked like a large red camellia could be the one.  So far, there have been some good ones, but not one is quite red or large enough.

I took the above photograph in Margaret Moseley's garden last Friday.  This flower isn't as big, but the color is close.  She has a book with pictures of just about every named Camellia japonica, so maybe I can find the elusive red camellia there.  It's a formal double, the color of maraschino cherries and maybe five inches across.  It's not a reticulata, because it was hardy in a similar climate to ours.

I just went upstairs to see if I could find the Monrovia catalog, as I never throw anything away.  I had multiple copies from several years, but I can't locate a single one now.  But, I will keep looking.  I think I can find this camellia or one that will do just as well.
Posted by Martha Smith Tate at 1:32 PM 5 comments: