A hydrangea mystery to be solved 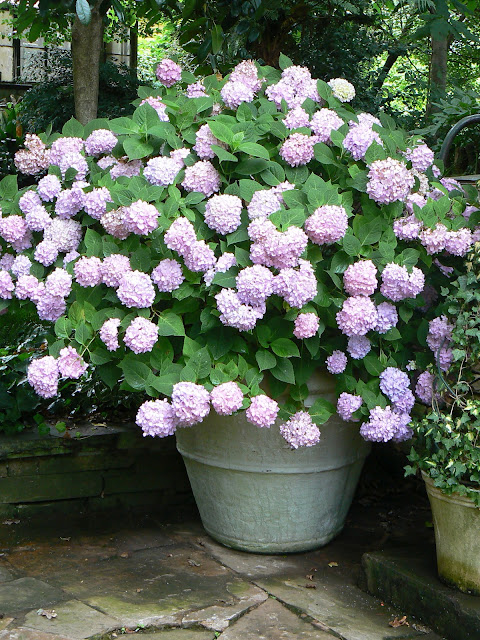 The title of today's blog entry does not refer to the hydrangea above.  This photograph was taken in Ryan Gainey's garden one year on the American Hydrangea Society's June tour.  What a sight this was in the corner of Ryan's patio.  I don't know what this variety is (actually, that fact does constitute a mystery of sorts); I should have taken the time to ask, and I'll do that the next time I see Ryan.

The mystery I'm talking about cropped up this morning.  As I was coming back down from my walk to the mailbox to get the paper (my dog and I perform this ritual, rain or shine, every morning about daybreak), I was startled to see a massive black plastic container with a very large, well branched hydrangea, sitting in front of the chimney on the left wing of the house.  When and how did it arrive here?

I don't think it was there when I got home from church; in fact, I'm sure I would have noticed it.  I was here all afternoon, then left to get some items to fix supper for an ailing friend.  I left to go to his house a little after 6:00 p.m., stayed for a while and watched the red carpet part of the Oscars and drove home.  It was dark, and I didn't notice anything.

I just went out to look again to see if I could figure this out.  There's no tag on the plant.  I can't tell if it has been dug recently or if it has been growing in the container for a while.  I do know one thing.  I can't  lift the giant plastic pot even so much as an inch.  The diameter measures 23 inches; the container is 18 inches high.  How many gallons would that be?  I can manage a five gallon plant, but this must be twice that, if not more.

The hydrangea is a macrophylla; I can tell by the snippets of green leaves here and there.  Whoever brought it had to have had a truck and another person to get it onto the ground.

Do I have a secret admirer?  I wish!  Surely an explanation will surface soon.  There's no message on my answering service, no note anywhere.

Ever since I saw a photograph at a garden in France where there were two enormous pink mophead hydrangeas in large pots, flanking the entrance to a walled-in garden, I've wanted a big macrophylla in a container.  Then, I saw Ryan's and vowed I'd do this one day.  I do have one started, but it was one a friend layered for me, and it isn't all that large yet.  I'm hoping it will turn out pink (everything I put in the ground here eventually turns toward blue).

But this one.  If I could figure out a more attractive container (build a box around it?), it could stay just where it is, and I think I'd have a pretty spectacular plant this June.  I'll let you know when the mystery is solved.
Posted by Martha Smith Tate at 8:32 AM 1 comment: