More arches in the snow 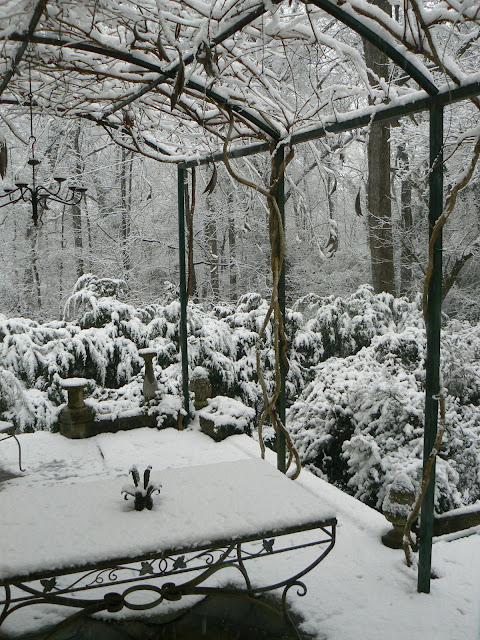 This is that same February snowstorm in 2010.  I look at this picture and can only see all that's wrong about it.  There's no railing around the edge of the terrace.  I had bought just one cast concrete baluster and a length of the base, but decided that wasn't the way to go.  So, I did nothing for three decades. Maybe this will be the year to put up a simple iron railing.

Again, I should have pruned the trumpet vine after summer.  This is a red version of the native Campsis radicans.  Hummingbirds love it.  I ordered it from Wayside Gardens, but I haven't seen it for sale in a long time.  The color of the flowers is a dark red.  It's a good cover because it's deciduous in winter to let in light and makes good shade in summer when the sun comes in from overhead and then the west.

Where did I get the idea for this terrace, which is bordered on two sides by the house and has a set of steps coming up the side?  This is crazy, but I was in the back seat of a rented station wagon in the Loire Valley when I saw a house sitting way back from the road.  I yelled for the driver to stop (one of my tennis cronies), but she kept going.

So, I only had a glimpse to go on, but I knew the minute I saw steps leading up to a terrace covered with arches that this would work for a space that had been left blank on the northwest side of the house.  The hard part was getting it executed, but I was pretty much able to copy the vision I had in my head.

I guess the moral of this tale is:  Keep a lookout for things you like, and don't be afraid to copy them.  Only be more forceful if you are in a moving car and need more than a passing glance to go on.
Posted by Martha Smith Tate at 5:16 PM 2 comments: