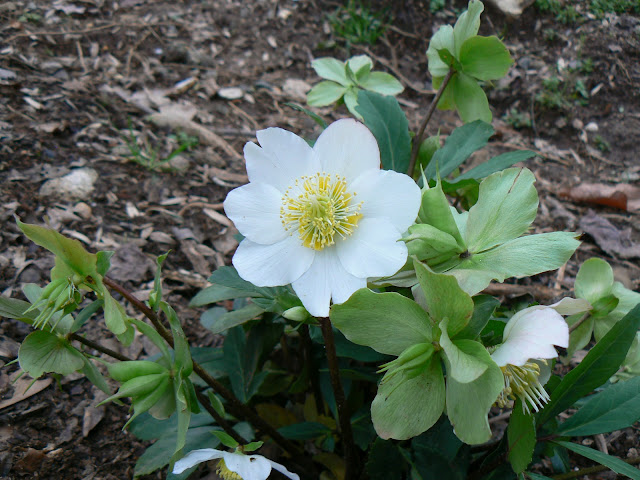 On December 19, 2011, I took a photograph of this hellebore, which was a gift from Marsha Yeager, a generous friend and designer/installer of gardens  (who has a beautiful garden of her own).  This is the Christmas rose, Helleborus niger HGC 'Jacob', which has just recently come on the market in the Atlanta area.  As you can see, today, February 8th, it is still blooming.  There are several buds yet to open.

I am pleased as punch over this flower, as my other Helleborus niger has not bloomed since 2006 (I had allowed someone to divide the latter, and it has never recovered).  I do think I'll dig it up and plant it next to 'Jacob', just to see if it performs better.

Since the foliage is evergreen, I'm thinking if I could rob a bank and buy a couple dozen of these, I could line a path in my new pocket garden.  I'll have to see how the new foliage fares and make sure the old leaves are cleaned up.  What looks good in February in Georgia could have trouble in July and August.  Generally, though, hellebore foliage, if the old leaves are pruned away, holds its own.

But here's another unknown.  We've had a mild January.  I'm not sure there would be such continuous bloom if temps went way down.  But, I think the plant would bounce back.  One source says this hellebore is hardy from Zones 3-8.  I guess the jury is still out, but this year we're off to a great start.
Posted by Martha Smith Tate at 12:48 PM No comments: