Not afraid to fail 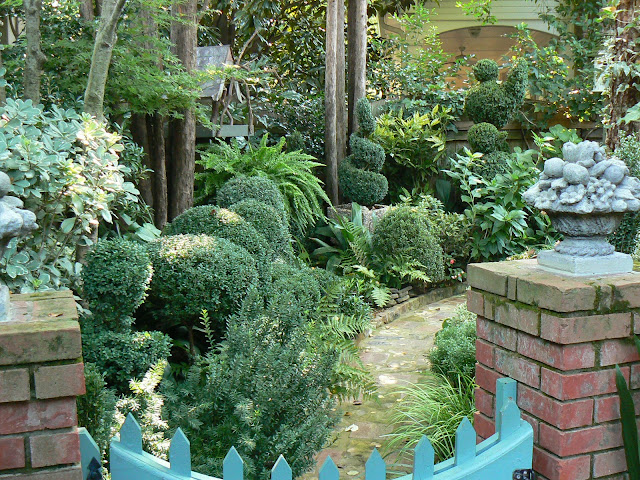 Next to my house, I have cleared out a formerly congested space to make a pocket garden.  I use the latter term because the area is small and contained on the sides by 1) a hemlock hedge  2) magnolia trees and 3) a hill that leads up to a paved terrace.  The entrance (not yet defined by anything) is slightly uphill and narrow.  I have timidly put in a few plants, but you'd think someone who has looked at hundreds of gardens would immediately envision what this garden should look like and be busily getting it installed.  Yet, I'm afraid that I will make a wrong decision; therefore, I make none.

So, to bolster my confidence, I've been looking at photos from Louise Poer's garden.  Here's someone who took a mud pit with only some builders' trees and has made a small but very complex Eden.  Granted, Louise has been a garden designer for years, but she came about it naturally.  She credits her ability to imagine a garden from having lived in England when she was a young bride.  Her aesthetic comes from taking ideas from both grand gardens and tiny cottage gardens alike.

But the real gift she has is not being afraid to experiment.  And, I must say, she's not timid about packing things in. "I don't like to see bare ground," she says.  She's constantly on the prowl for ground covers and comes up with clever ways to cut into her borders with smaller vignettes.  Even though her entire garden is not much larger than my dining room, kitchen and maybe part of a hallway, she's somehow rigged it to look much larger.  There's enough plant material in there for an estate.

Around my disorganized property, there are numerous boxwoods that have been waiting for years for a permanent home.  I could start right there by studying Louise's use of various types of boxwoods for structure and contrast (I have one variegated one that lives miserably under a water oak and hasn't grown an inch since I bought it). I also have two captive pyramids that have soldiered on in containers for over a decade.  I think they'll be so glad to make an escape.

I'll need a path, not only to access the garden, but as a way to organize the plants.  I won't be able to do any paving, but I have 4,000 cobblestones (this is a story for another day), and I could use some to make an outline for a gravel path.   I could do some cut-outs, like Louise does, so I can pack in even more plants.  My garden will be viewed from above, so I'll need some real strong lines to make it attractive.

I'm already feeling better.  Tomorrow, I'll show you an entrance to Louise's garden.  I already have the stone to copy the new columns she put in this year.

But, I just remembered.  My white tailed interlopers.  They've already gotten in there and laid waste to a hydrangea.  I think if I could pack in enough camellias and sasanquas around the edges to hide some sort of fence, I could keep the deer out.  That's crucial, because I want to copy one hosta combination (will show you that soon) in Louise's garden.   An unprotected hosta doesn't stand a chance.

Okay.  I'm going out there right now and make a drawing.  My heart is beating wildly, thinking of the possibilities.  The boxwoods should be moved now.  Plus, I need to act while I have the nerve, although I can always come back in and look at photos of Louise's garden if I lose confidence.  Wish me luck.
Posted by Martha Smith Tate at 10:43 AM 4 comments: