Where to go, what to do? 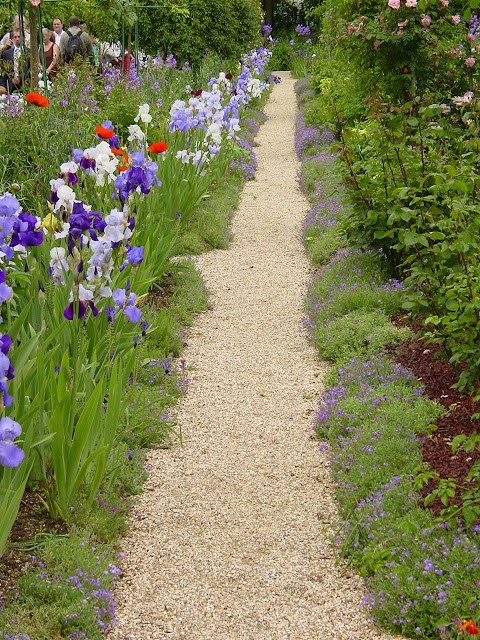 I have a trip coming up at the end of June.  My dear friend from grammar school is touring Scandinavia with her husband and their friends.  Then, she's flying in from Copenhagen to join me at Charles de Gaulle airport.  From there, we're going somewhere for two days before we take an apartment on the Ile St. Louis in Paris where we'll stay a week.  I like being with Linda in Paris, because she goes her way, and I go mine.  However, we go off on a lot of adventures together, too, so it is the perfect set-up.

Since I want to see gardens, I'll probably take day trips from Paris.  Pictured above is a path at Giverny.  I will go there again, but I'll probably sign up for one of those day trips on a tourist bus to get there.  When my daughters and I went to Giverny in 2006, it was in May (I think towards the end of the month).  It was so crowded that it was almost unbearable (check over to the left of the photo to get an idea).  We ate a terrible meal with terrible service at a huge price at the restaurant there, so I won't do that again.  Also, the line to visit the garden took at least an hour.  I'm sure it's always crowded in summer, but it will be fun to see what's in bloom at another season.

One place I want to see is the Roseraie de l'Hay.  I'm hoping it will be a cool spring and the roses will hold off until I get there.  But, that will be a day trip, as it is just outside Paris.  (An aside here:  I was in Paris in the summer of 1968.  My friend from college was there because her father, who later became Secretary of State, was involved in negotiations to end the Vietnam War  - which obviously didn't work.  There was a terrible heat wave.  My other college friend and I had planned to take courses in Paris for the summer, but it was so hot, we jumped a train to Scandinavia where it was sleeting and proceeded to go all around Europe and to England, Wales and Ireland, ending up in St. Tropez.  I could write for days about that crazy trip, but suffice it to say, it can be blisteringly hot in Paris in June.  I hope this won't happen again and ruin the roses).

But back to the question of where to go for those two days.  I've rented cars and driven in France and Paris before, but I don't like driving when I have jet lag.  Getting on the Paris peripherique is a nightmare anytime, but I can't imagine tackling it if I haven't slept.  So, we could take the fast train somewhere, but where?  Of course, I have gardens on my mind, and I'll be making that the focus of the trip.  Linda is agreeable to the idea.

I've never been to Brittany, and there's a garden I'd like to see there.  The catch is that it is closed on weekdays.  Even if I could get them to make an exception, once we got there by train, we'd still have to rent a car.  Linda's never been to the Loire Valley, but that would also involve a car.  Biarritz is another place I haven't seen, and there's a fast train to Bordeaux, but I don't know.  That seems too hurried.

I do have a book given to me by a French friend that lists gardens that are open to the public.  I need to study that for ideas.  I will report later when we decide where to go and what to do.

Posted by Martha Smith Tate at 7:48 AM 3 comments: