Color echoes in the garden 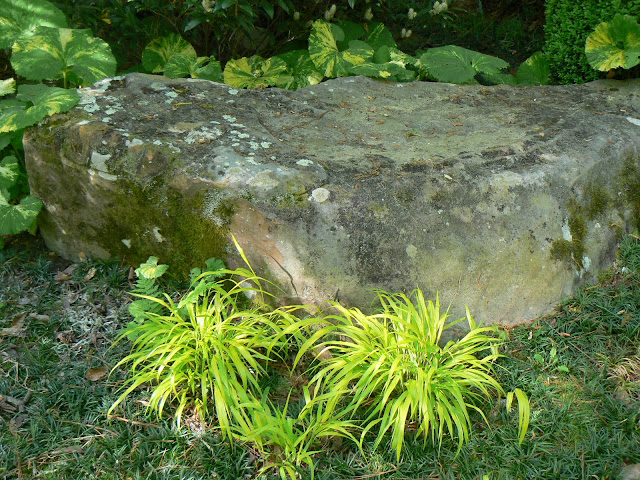 I don't know why I pick up a garden book at the end of the day when I don't need to get my heart pumping furiously.  While I was looking for something else, I came across British garden writer Pamela Harper's Time-Tested Plants:  Thirty Years in a Four-Season Garden.  I started thumbing through and wishing I could rob a bank to get all the plants she listed and a deer fence and retaining walls I so sorely need for my new garden areas (still in dream stage).

Pamela lives in Tidewater Virginia, and I went there to scout her garden for an episode of A Gardener's Diary.  I was there in early March, and we taped her show in early May.  Both times made my heart beat with the thrill of such wonderful plants so artfully arranged.  She had a red camellia that I lusted after (I wonder if it was destroyed in the hurricane that pummeled her garden the very next year).  I wrote to her to ask the name, but it turned out it was an unknown variety that had been given to her.  It was the most beautiful camellia I'd ever seen - big, bright red with semi-double petals.

But, there were many other things in bloom when I was there, although it was early.  She had these crazy cultivars of ranunculus.  My favorite was 'Brazen Hussy'.  I once bought that one, but it disappeared on me.  It had dark bronze leaves and bright yellow flowers.  Pam had a whole collection of buttercups.  I hadn't any idea there were so many different kinds with such interesting foliage.

In the episode of A Gardener's Diary, Pam talks about another book she wrote called Color Echoes.  The idea is that you pick certain colors and weave them throughout the garden, but with different flowers and foliage.  This especially works in her garden, which is basically a long rectangle bisected by a curving gravel driveway.  Since there are no "rooms" or different levels to speak of (she has created berms to lift certain plants out of the high water table), the concept is successful in drawing the eye to different areas and making the garden cohesive.

As I was scrolling through some photographs, the above scene made me think of Pam's color echoes.  I took this picture in an Atlanta garden that is mostly shady.  The owner has brightened things up by using splashes of yellow-chartreuse.  I tried to picture how uninteresting the rock would look if the plants were solid green.  The splotches of color on the farfugium (the large, rounded leaves in back) are picked up by the bright sword-like foliage of the hakonechloa (try to pronounce this!).  The latter literally glows, especially set against the dark dwarf mondo.  I love this simple, but striking combination.

For now, I'm going to put Pam's book away.  I'll bring it out when I can look at the photographs of such plants as Salvia 'Wesuwe',  Lunaria annua 'Stella' (which I used to grow, but no longer have the seeds), Rubus cockburnianus 'Golden Vale' and Phlox paniculata 'Norah Leigh' (with variegated leaves, no less) without risking my wildly beating heart keeping me awake all night.
Posted by Martha Smith Tate at 3:49 PM 1 comment: