Not a normal year, or is it? 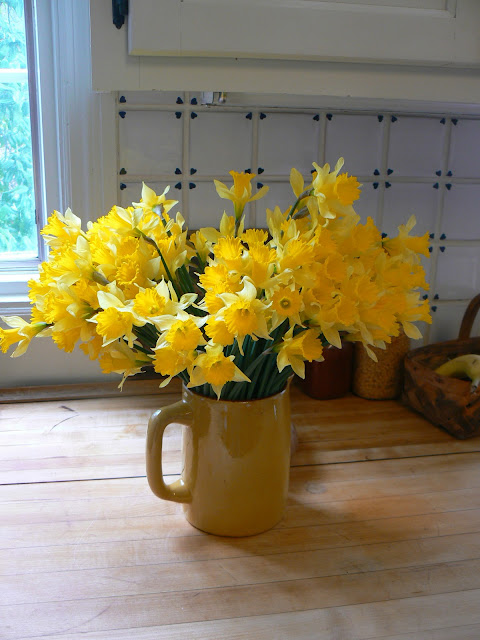 This photograph of what we call jonquils here in the South, but which are officially Narcissus pseudonarcissus, was taken February 28, 2011.  A similar shot (also revealing the poor condition of my countertop) shows a huge bouquet of these same flowers, gathered from my woods on March 10, 2009.

So, on this past Monday, which was January 9th, I was up at the little house transplanting some sasanqua seedlings when I spied something yellow on the slope behind the cottage.  Daffodils (these days I say daffodils and not jonquils), already blooming!

I picked nine of the flowers before it started to rain.  I'm not showing them, because they are in an empty jar of Paul Prudhomme's Blackened Redfish Magic seasoning.  Plus, my countertop is in even worse shape than above.

But, what on earth?  We've certainly had bouts of unseasonably warm weather before.  However, I don't recall these flowers blooming in early January.  Late January, yes, but not this soon.

On Sunday, I noticed a scattering of yellow blooms on some Carolina jessamine on a neighbor's fence.  I also have a few blooms on my white flowering quince, and a couple of open flowers on some forsythia.   The 'Ice Follies' daffodils are up and budded.  The yellow mahonia flowers, usually at their height in February, are beginning to taper off now.  Never have I seen the latter bloom in December as happened this year.

But, not to worry.  The plants always seem to survive these crazy fluctuations and return to normal the next year (if there is a normal anymore).  Last week, it went down to 22 degrees and turned all the open camellias brown.  Yesterday, I noticed the flowers were blooming like crazy once again.  They are certain to take a beating at the end of this week when it turns cold again.

Even though these daffodils were early, they still had that unmistakable fragrance.  One whiff, and I am transported back to my yard in Palmetto, Georgia, and I am picking jonquils for my teacher.  The juice is running out of the stems, and my mother, who has been watching me out of the kitchen window, brings some wax paper and wraps them up.  The next morning I arrive with my offering.  The gesture doesn't make my first grade teacher Miss Nellie Keith any sweeter, but I feel good about giving her the flowers.

Back to the present.  I don't know who planted these bulbs or when (the contractor who repaired the little house found newspapers on the walls from 1937; the deed lists it as having been built in 1926), but they have been going strong since I came here in 1973.  There have been years when they were early and years when they were late.  One year, we had a blizzard on March 13, and it broke all of them off.  That's the only time I can remember that they succumbed to the weather.

Even though it's turning cold and windy now, I'll go up this afternoon and see if any more are blooming. I imagine there are lots more to come, so I needn't worry that these few were extra early.  I'll keep you posted on whether this is a normal year or not.  It's pretty likely that I won't be able to tell.
Posted by Martha Smith Tate at 11:12 AM No comments: