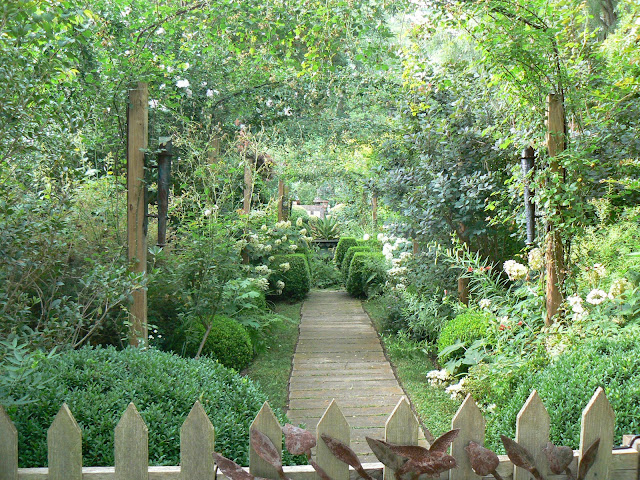 One of the rewards of writing a garden column for the Atlanta Journal and Constitution was getting to meet gardeners.  I'm trying to think.  Maybe there was one grouchy, unpleasant person in the whole bunch (actually, I believe this may have been someone I scouted for A Gardner's Diary), and I bet I interviewed at least a thousand gardeners, if not more.

A person I'll forever hold dear to my heart is Stella Smith.  I don't remember who gave me Stella's name, but to this day, this wonderful gardener continues to inspire me.

Stella was a barber.  Not a hairstylist in a beauty salon, but a barber in a barber shop.  A jolly person who was short of stature and who wore her hair cropped extremely short, Stella loved her garden, which was set in a spit of woods on a gently sloping hillside near the State Farmer's Market in Forest Park.  Of all the people I heard say, "Put a $1 plant in a $10 hole," or versions of the advice, it is Stella's quote I remember most.  She had stacks of bags of manure and Nature's Helper, and the health of the flowers, shrubs and trees in her garden served as testimony that her strategy worked.

I particularly remember a large patch of Madonna lilies she had growing in a sunny spot by the road.  These  beautiful white lilies don't usually do well in Georgia.  Early on, I fell victim to the catalogs and for several years running ordered them, only for them to bloom once and then disappear.  They came back for Stella, though.  I don't know her secret, but she also had bags of lime she used in her soil concoctions.  That could have been it.

One day, Stella called to tell me that she had terminal liver cancer, and the doctors didn't give her very long to live.  She said she had a favor to ask me.  She wanted to see Ryan Gainey's garden.   An avid reader of garden magazines, she knew all about the Decatur garden of this world famous garden designer.

I called Ryan, and he graciously said to come any time.  So, on a beautiful day in May, I picked Stella up.  She was weak and had trouble catching her breath, but was beaming with anticipation.

Stella was thrilled to meet the renowned designer, and she mustered every ounce of strength to examine his magnificent garden.  She said it was even more beautiful than she had ever imagined and marveled at the profusion of flowers and interesting plants.  She knew them all.

When I dropped her back at her house, she asked me to wait a moment.  She came back out with a book.  It was a well-worn copy of Wyman's Gardening Encyclopedia.  She said it had been invaluable to her, as the volume listed information on just about any plant and contained explanations of garden terms, as well.  She had written an inscription:  "To my friend, Martha Tate.  Enjoy!  Stella Smith, May 18, 1994".

I never saw or talked to Stella again.  There was never any answer when I would call, so I don't know when she died.

This treasured book turned out to be a godsend for me and still sits on my desk today.  Before the days of DSL and quick access to information via the Internet, I depended on this comprehensive work to research newspaper columns and for writing plant portraits for A Gardener's Diary.  The book had been a gift to Stella, as well.  Another inscription read:  "Merry Christmas and Best Wishes for a prosperous New Year.  Jim & Linda, 1975".

The above photograph shows one area of Ryan Gainey's garden years later in the month of June.  I've seen his wondrous creation many, many times, but being there that day in May, with a seasoned gardener who appreciated every leaf and flower, was perhaps best of all.
Posted by Martha Smith Tate at 10:36 AM 1 comment: