O Happy Day! A Gardener's Diary is back! 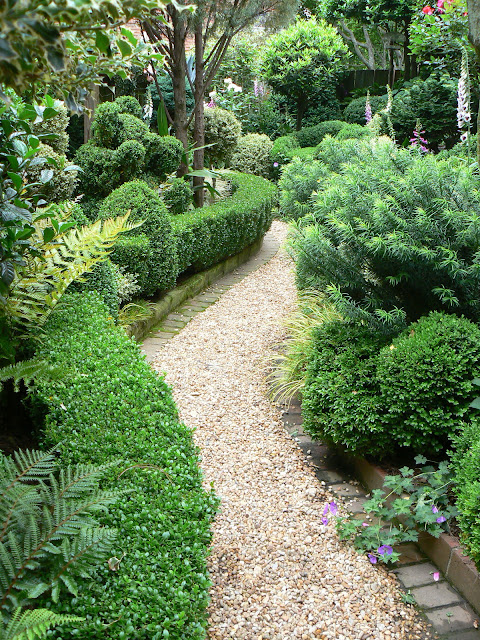 This is a great day!  I just watched an episode of A Gardener's Diary, one of HGTV's original shows that launched with the channel in 1995.  The show was about a beautiful garden around an ancient mill on a river in Bucks County, Pennsylvania.  There are some great ideas for landscaping in this episode and some great plants to consider.

Kathryn MacDougald, Mimi Fuller Foster and I started A Gardener's Diary, and it ran for 11 years on Home & Garden Television (HGTV).  We went all over the U.S. and even to Canada to tape episodes.  Our idea was, instead of giving you a quick six-minute tour of a garden as was the case on Victory Garden (at the time we launched one of only a few garden shows on television), we'd take you to a garden for an entire episode.  That way, you'd get to know the gardener, see a lot more plants and have an in-depth look at a private garden you'd otherwise not get to see.

We shot the first episode in June 1994.  The channel came on the air on December 31, 1994, and our show debuted the next day.  At the time, there wasn't a lot of programming, and the episodes would run several times a day and into the night.  We've never had an official count, but we ended up making well over 225 episodes.

In late 2006, we were set to do two more years of 26 episodes per year.  I had already scouted some gardens, and we were all set to go.  Then, a terse e-mail from our editor at HGTV.  There will be no more episodes of A Gardener's Diary.  "Tomorrow is my last day," he wrote.  No further explanation.

A new president had just arrived at the channel, and I'm guessing that because it was the height of the housing boom, they wanted to make more shows about flipping houses and couples deciding on which house to buy in a hot market.  The garden shows that survived were about quick makeovers, with a team coming in and sprucing up a lot.  Our show was basically a comprehensive tour of an already established garden.  We had a lot of followers who were disappointed when it was canceled.  People who desperately missed the show asked to buy video sets.  Some of the old episodes were shown for a while, but then it was taken off the air.

Pictured above is a path in Louise Poer's garden which was featured on an episode of A Gardener's Diary.
http://www.hulu.com/watch/315463/a-gardeners-diary-a-renovated-mill-garden
Posted by Martha Smith Tate at 8:57 AM 12 comments:

If I only had a sidewalk 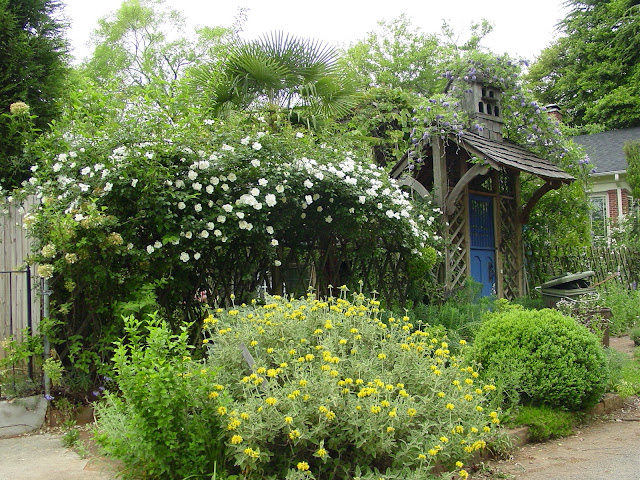 I love sidewalks, but Atlanta is not much of a sidewalk town.  Not that certain neighborhoods in the city don't have them; many do.  But mine doesn't.  Not even close.

But if I did have a sidewalk, I'd want it to look like this.  The garden pictured above is in the eastern part of Atlanta, in an area that had once fallen on hard times, but has made a huge comeback.  All through good times and bad, it has had sidewalks.

Brooks Garcia, a popular and very experienced garden designer, moved into this house (seen in the upper right hand corner) several years ago.  He immediately started planting in every available space.  The scene above, which includes the climbing antique rose 'Silver Moon' and a mass of yellow Phlomis fruticosa, is actually on the street that runs down the side of the house.  Brooks constructed an entrance to the back garden.  Clambering on top of the rustic structure is the American wisteria, 'Amethyst Falls'. It has smaller blooms, flowers at the end of April, well after its destructive Chinese cousin.

If you walk up the sidewalk past the Herbie (that's what we call the green garbage containers in Atlanta) and look to the left, you'll see more roses planted in borders alongside the house.  Go around to the front, and the sidewalk there is overflowing with flowers.  In May, the large chartreuse heads of Euphorbia characias ssp. wulfenii hang over the pavement.  On a fence and scrambling up a tree are more roses, namely the lemon yellow David Austin rose 'The Pilgrim'.

Needless to say, passersby often leave notes of appreciation for Brooks.  I've known Brooks for years.  His first garden was in back of his mother's house near Chastain Park.  It was magical and chock full of interesting plants and ideas for economical structures that looked great.  One of my favorite magazine covers ever shows Brooks in this garden (the magazine was Atlanta Homes & Lifestyles).   Next, he lived in an apartment building in Buckhead, and with the owner's permission, he transformed the courtyard into a flower and vegetable garden, complete with tall topiary birds made of privet and patterned borders of parsley and white lily-flowering tulips.  It was charming.

Brooks has designed many wonderful gardens for clients and has even worked at the Chelsea Flower Show in one of their display gardens.  His designs were always a hit at the Southeastern Flower Show, as well.  I like everything he's ever done, but I am especially fond of his sidewalk plantings because they bring joy to so many people.  Plus, I can drive by and see the beauty anytime I'm in the area.
Posted by Martha Smith Tate at 8:06 AM No comments: