The race for 'Dainty Bess' 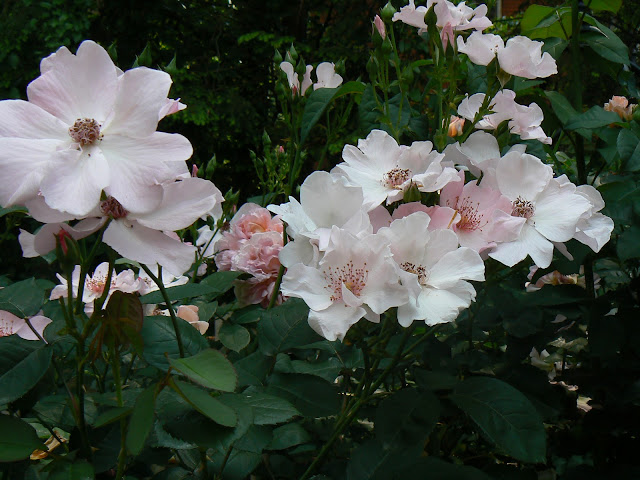 This entry should be called, "Confessions of a plant crazy procrastinator".

This is so difficult to admit, but for a long time I had a terrible habit of buying plants and letting them sit in their containers for years, sort of like a hoarder.  For example, I had a daphne which bloomed on my back doorstep for seven years.  It was in a one-gallon pot, and it was never fertilized.  In that particular case, I was so afraid that I would plant it in the wrong place (daphnes are notorious for up and dying for no good reason) that I just kept it as it was.

Even worse, I had a whole forest of camellias, gardenias, hydrangeas, roses and other flowering shrubs that I would drag in and out of the basement in winter.  It was insane.  In summer I had to water almost every day.  Somehow, I managed to keep most of them alive for years.  Oddly enough, they would continue blooming, and I guess that fact allowed me to continue this awful habit.

I think one of the worst cases involved the beautiful early hybrid tea rose, 'Dainty Bess'.  I saw it in someone's garden and thought I couldn't live without it.  I rushed home and called around.  Finally, I found a nursery that had one - but only one.  "Will you hold it for me?" I asked.  No, they couldn't because it was on sale.  It would be first come, first serve.

I dropped everything and rushed to the nursery, which was several miles away.  My heart was pounding with fear as I got out of the car and ran into the greenhouse.  I was panicked that someone had beat me to it.

They hadn't, and I brought the healthy plant home.  It had been a close call.

Eight years later, 'Dainty Bess' was still blooming in the original three gallon container.  I finally gave her away to someone who had lots of sun and was willing to nurse the now spindly rose back to health.

There was only one redeeming thing about this period.  If someone gave me a plant, I made sure it got  in the ground immediately.  If I could only have been so good with my purchases.  I was always waiting for my ship to come in so I'd be able to have the perfect garden setting for them.  That didn't happen.  It was an embarrassing case of the cobbler's children.  The garden writer with no showcase garden.

I'm glad to report that I no longer do this sort of thing. I finally remedied the habit with a self-imposed moratorium on buying plants.

But, I'm back at it again.  This time, though, I have some spaces cleared out and someone to help dig holes.  Once I get some other things done like retaining walls and a deer fence, I want to give 'Dainty Bess' another try.  This time, I'll make sure she gets the home she deserves.

Note:  'Dainty Bess' is an exquisite hybrid tea rose - one of the few single-flowered ones.  It was hybridized in England in the mid-1920's.  I took this photograph in Anna Davis' garden in Atlanta in early May.
Posted by Martha Smith Tate at 9:33 AM No comments: