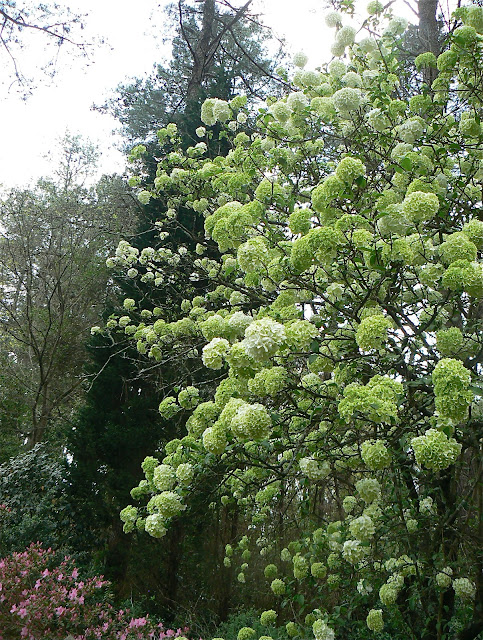 Early March.  It's an odd time here in Georgia.  The trees for the most part haven't leafed out.  It's technically still winter, but all around there are signs of what's to come.

At the back of Margaret's garden, the giant snowball viburnum is in its lime green stage.  Eventually, it will change to mint green, then pure white.  This particular specimen of Viburnum macrocephalum is a fairly new addition.  You have to look up high to see Margaret's giant tree form of the same species just a few paces away.  The latter is probably thirty years old or more.

Nearer the house, the fragrant viburnums are perfuming the air - V. x burkwoodii, V. carlesii, V. x carlcephalum and V. x juddii.  Margaret was determined to collect as many viburnums as possible, and she definitely reached her goal.  Most are showy in spring, but several are grown for their colorful fall fruit.  The Atlanta Journal & Constitution devoted a Home & Garden section cover and a huge spread to her extensive viburnum collection.

While this photograph shows what would be a dramatic change in seasons in most gardens, in Margaret's case, winter is subtly blending into spring.  All along through late fall and winter, there has been a succession of camellias;  hellebores, which began flowering in January, carpet the garden floor.  Several specimens of Daphne odora have bloomed, along with Edgeworthia chrysantha, Spiraea thunbergii 'Fujino Pink' and Prunus mume.

So, by early March, the pink and white forms of flowering almond have come out, and a few azaleas are beginning to show.  In a couple of weeks' time, the explosion will be full blown and dazzling.  It just gets better and better.
Posted by Martha Smith Tate at 1:54 PM