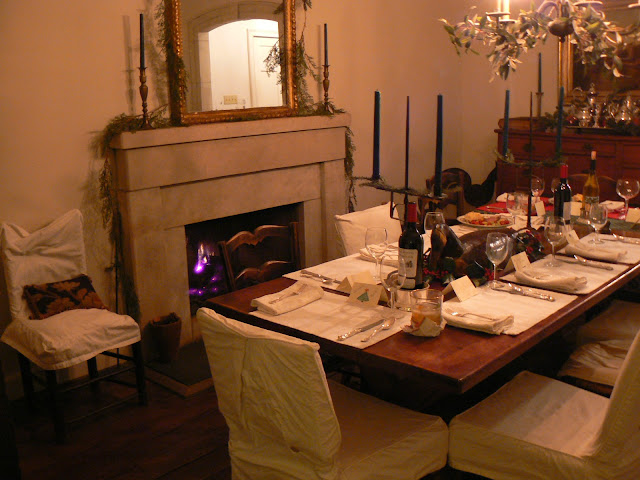 Every Christmas Eve for the past, say, seven years, the Gatins family has come for dinner at our house.  Tutta (her real name is Laura), who is not as big as a minute,  is the head of the clan, consisting of daughters Julia and Sophie and son Charles. Tutta's sister Rozzie, a beloved teacher at The Lovett School, always comes.

We came up with this idea of spending Christmas Eve together a couple of years after the death of Tutta's husband, Freddie Glass, who was in my freshman class at Vanderbilt.  He and I had remained friends ever since.  I knew Tutta because her daughter Sophie and my daughter Laura were great friends from kindergarten.  Tutta and Freddie both came to my rescue when Chip died suddenly in 1999.  They fell in love and married the next May.  Tragically, Freddie died the next spring from a fast moving melanoma.  The Gatins children had lost their father, Tutta's first husband, when Sophie was in middle school.

But back to the present and the photograph above.  It shows the dining room just before we lit the candles.  This year, there were eleven of us.  My daughter Anne brought her friend Ari Douthit from New York, where they both live.  Julia is married to Brett, and his mother Cindy came from Nashville.

I had pretty much decorated every corner of my house.  In the dining room, I had strung cedar up and over the mirror and mantle.  Usually, I have red camellias to put on the silver service, but not this year.  I settled for Fraser fir I scavenged from the Home Depot and some lethally sharp Chinese holly that grows up by the little house.  In the middle of the dining room table, which is warm pine made into a sturdy sawbuck style (inherited from my mother-in-law), I always place the larger of a pair of wooden goose decoys and surround him with pine cones, fir and holly.

In a silver punch bowl on a stand over between the windows, I made an arrangement of greenery - pine, cedar and winged sweet gum sticks from the farm, some variegated pittosporum from the little house, magnolia from the woods and cryptomeria brought to me by my friend Benjie (I have several of the latter trees in different stages of growth; next year, I can start clipping).  In the windows are hanging boxwood wreathes I made from a particularly dense, dark Buxus microphylla my mother planted 52 years ago at the farm.

I do have something fake in there.  I could never find the chandelier of my dreams, so I bought one with good lines from Home Depot and sprayed it a bronze color.  On the long chain, I have an off-white rumpled cover.  One year, I found some really good fake olive branches at Pier One and attached them to the arms of the chandelier, along with some real sticks from a friend's aronia tree.

So, there we all were last night (when the Gatins walk into my house, it's as if an explosion has occurred, they are so lively and fun).  Although we've all had our individual losses along the way (this year, two of the Gatins children's beloved uncles died), somehow this dinner and the gathering at the piano for some pretty bad singing and then moving on to an hour of dancing seems to sweep all of our troubled memories away, at least for one night.

Last year, I wrote down a passage from Maureen Dowd's column in the New York Times on December 25th.  It seemed to sum up the feelings we all probably have, especially as time takes loved ones away, and the years keep passing by so quickly.   I especially like Charles Dickens' words in the last paragraph:

In his 1851 short story "What Christmas Is As We Grow Older,” Dickens makes the case that the holiday is the time to “bear witness” to our parallel lives, our “old aspirations,” “old projects” and “old loves.”
“Welcome, alike what has been, and what never was, and what we hope may be, to your shelter underneath the holly,” he wrote.
Maybe, he suggests, you end up better off without that “priceless pearl” who does not return your love.  Maybe you don’t have to suppress the memory of deceased loved ones.
“Lost friend, lost child, lost parent, sister, brother, husband, wife, we will not so discard you!” he wrote.  “You shall hold your cherished places in our Christmas hearts, and by our Christmas fires; and in the season of immortal hope, and on the birthday of immortal mercy, we will shut out Nothing!”

Posted by Martha Smith Tate at 7:05 AM