Not one of my smarter moments 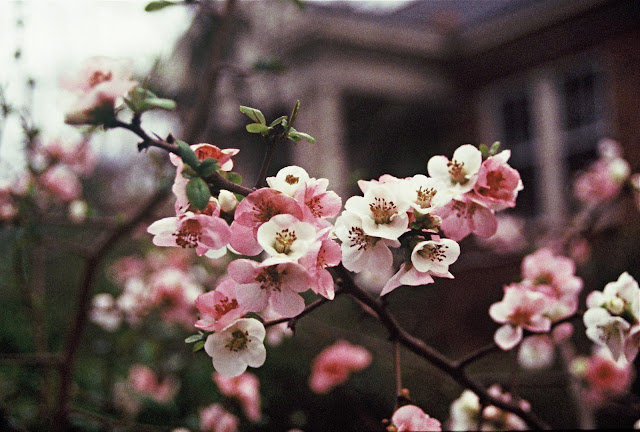 Back when I first started writing for the Atlanta Journal & Constitution, the newspaper assigned photographers to take pictures for my column.   This usually worked well, but sometimes it didn't.  For example, I would see a flowering shrub at the Atlanta Botanical Garden that was absolutely knock-out beautiful.  So, I'd decide on a subject for the column and put in for an assignment for a staff photographer.

What happened part of the time is that the photographer and I obviously didn't see the same plant the same way.  I would have in mind a shrub covered in spectacular flowers.  The photographer would zero in on one tiny flower and get right up on it.  So, my description didn't match what you saw.  I would hold my breath every week when I opened the Home & Garden section to see how my words were depicted.  Half the time I would cringe at what I saw.

An example stands out.  The double oakleaf hydrangea 'Snowflake' is normally so impressive, with inflorescences that can be up to 20 inches long.  I turned in an assignment for this shrub, which blooms in May.  In the column I raved on about these huge, pointed blooms with double flowers that were positively magnificent.  What did the photographer do?  He zeroed in on one tiny floret.  I don't know how he did it, but it looked like a small white bloom about the size of a nickel against a dark background - completely removed from the plant.  I was embarrassed after I'd given such a glowing description of what one could expect from this native hydrangea.

I finally bought a camera (no digital back then; all 35 mm slides) and started taking my own photographs.  It was a hassle, as I would have to get them developed, then mail or take them down to the AJC and pray I wouldn't get towed while I ran them inside to the front desk.  When digital cameras and e-mail came along, life got a lot easier.

But, that's all beside the point.  I tried to take my camera everywhere I went, so if I saw something interesting, I'd be ready.  Hence, the photograph above.  It was still in the slide days, and I was riding with some friends in Athens, Georgia, when I spotted the above shrub.  It's Chaenomeles 'Toyo-Nishiki'.  I had long wanted to write about this unusual flowering quince.  It can have a rare combination of red, white and pink flowers on the plant at the same moment.  In this rather grainy slide, you can only see the white and pink, but trust me, when all three colors are on the plant at once, it is beautiful.

So, I asked my friend who was driving to stop the car so I could get out and take a picture.  The shrub was literally sitting next to the sidewalk on top of a wall, so it was at eye level.  I hopped out and took this photograph.

All of a sudden, a wild-eyed man came running out the front door of the house, pointed a shotgun at me, and yelled, "What do you think you're doing?  Get out of here."

"Oh, sir, I just wanted a picture of this beautiful quince," I managed to say.  In my usual way, as my daughters remind me constantly, I started overexplaining.  "I can never find this shrub, and I needed a picture for the newspaper, and I won't say where it is.  And, I thought it would be okay, because we're allowed to take pictures if we're on a sidewalk or street."  I went on and on.

So, I ran back and got in the car.  My friends couldn't believe what they'd just witnessed.  I was shaking, and I thought my heart was going to jump out of my body.

In the end, I went back on my word to the gunman.  I published this picture.  But, it was not that year, nor likely the next.  Not that I feared the man would come after me (these days with the Internet, he could find me easily), but I didn't want the paper to get in trouble.  The policy is, or at least was, if you shoot a picture like that from a public street or sidewalk, you're okay.  The only thing here is that the house is visible in the background.

But, thinking about more pleasant subjects.  This flowering quince is a great one to grow.  I remember when I first saw it, I thought it was absolutely exquisite.  I haven't seen another one since, come to think of it, although I do believe they're available in the trade.  This is not the best photograph, and doesn't do the plant justice.  However, if one considers that I only had that quick moment before I was face to face with the barrel of a shotgun, I'd say it turned out pretty well.