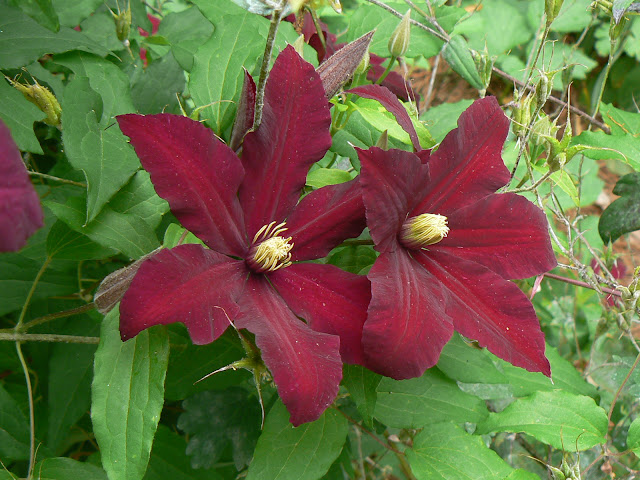 The title I've chosen for this post has a little story behind it, although it hasn't a thing to do with flowers.

This is Clematis 'Niobe' - and it is red with yellow-gold anthers, and it does have green leaves.  No silver, though.

I had this idea to publish some photos of red flowers during December.  I've been saving this particular one, which I took some years ago in Milton and Davee Kuniansky's Atlanta garden, for just such a time.  This clematis blooms in May and June here in Atlanta, and it has velvety leaves and an almost jewel-tone color.

But what has this to do with my title?  Once again, I'm going off on a tangent.  I have something on my mind that has been bothering me for the last few Christmases.

We had this tradition in our church that the choir would sing This Christmastide (also known as Jessye's Carol) on the Sunday before Christmas.  It was usually a soprano who sang the lead,  but either the entire choir, or several other voices would do the other parts.  It would bring you to tears.  My late husband loved the song, and so did my daughters.  When we'd hear the beginning notes, we'd grab each other's hands.  The song is so beautiful that we'd all be wiping away a tear by the end.

And, the bonus was, we got to hear it again in its entirety at the Christmas Eve service.

Our former minister retired a few years ago, and the next Christmas there was no This Christmastide, either on the last Sunday before Christmas Eve or at the Christmas Eve service itself.  I accosted our new minister to let him know about the tradition.  He had not heard the song so didn't know that we'd all come to look forward to hearing it every year.

Okay.  Long story short.  It was explained to me by the choirmaster that this song had been the idea of our former minister's, and we needed new traditions.  Of course, none of us knew that this was connected to any one person.  I thought it was just the special song of our church.  For me, it also represented the warm times of sitting there with my husband and daughters.

Last Sunday, our minister introduced the song at the end of his sermon.  The catch was this.  The soprano sang it by herself.  And, she started midway through the song.  There were none of the chills you get when you hear the beginning, and none of the crescendos that come with the other voices.  And, it was a week early, so my children from out of town won't get to hear it, even in its pared down form.

Year before last, I did find it on ITunes, but the version (I bought the one by the University of Utah Singers) is nice, but not nearly as stirring as the one we had at our church.  It will have to do, I guess.  I think I just miss that special feeling when you'd hear the first arpeggios that introduce the song and the feeling of anticipation you'd have.  This Christmastide starts off with the lines, "Green and silver, red and gold, And a story born of old.  Truth and love and hope abide this Christmastide."

But away from nostalgia and back to this stunning red clematis.  It was hybridized in Poland (1970) and was awarded the RHS Award of Garden Merit.  Every year in the Kunianskys' garden, it has performed well.   I figure if it looks this good in Atlanta, Georgia, it would look equally as wonderful in cooler climates.  A nice red to have and fun to think about this Christmastide.