Thoughts on the eve of Thanksgiving 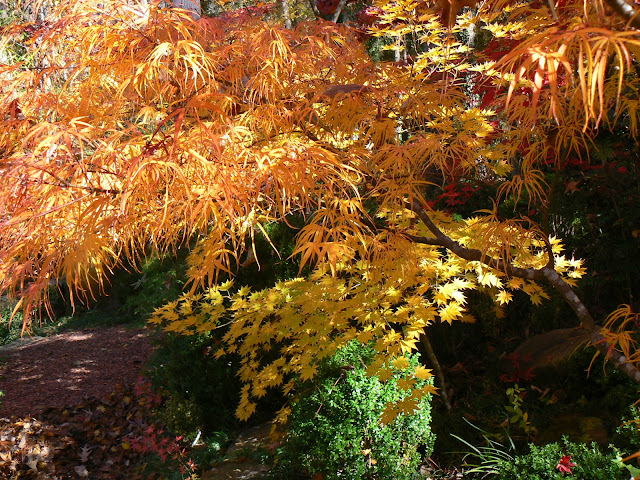 For some reason, I lost it in church on Sunday.  I got through the processional hymn"We Gather Together" just fine.  But when we got to "Come Ye Thankful People, Come", this huge wave of nostalgia washed over me, and the tears started flowing.  I was embarrassed because I was sitting on a pew with people I didn't know.  I got held up in Sunday School and didn't make it down to sit with the usual crew.

With every stanza, I got worse.  What happened is I suddenly had this thought about how Thanksgiving Day had changed so much over the years, and how I never thought it would.  For so long, in my childhood, it was the same.  My daddy took us to the Georgia-Georgia Tech freshman game.  Then, we'd come back to my house, and several families would have dinner.  Finally, the crowd grew until Mother and Daddy hosted it at the community center.  It was always fun in both places.

Then, there were some odd years after college.  One was in San Francisco, where I went to seek my fortune, but ended up as a ski bum in Taos, New Mexico.  In a drawer or box somewhere, there is a photo of Kathi Woods and me on the roof of our apartment, holding up an uncooked turkey.  In the background is the Golden Gate Bridge.

That next year, I was in Paris.  To have a real Thanksgiving meal, I volunteered to serve at the USO.  That wasn't bad, but I felt sorry for the soldiers who were so far from home.  The food was good, though, and I especially loved having cranberry sauce.  I'd looked for some at Fauchon, but it just didn't look right, and it was, of course, expensive.

The ones that brought on the tears, though, were all the years my husband and children and I went to Mother and Daddy's after they'd moved out to the farm.  My brother's family was there, and we had the adult table and the children's table.  Mother did all the cooking, including her homemade rolls, which only rivaled her dressing and desserts (boiled custard, pumpkin pie, pecan pie and ambrosia; sometimes there would be a Japanese fruit cake - not related to regular fruit cake).  My friend Susan from college would go with us.  It was a feast.

My niece would play the flute, and I would accompany her on the piano.  We'd do the Thanksgiving songs and then launch into Christmas.  This was handy, as it got us out of cleaning the dishes.  Then, we'd take a walk through the fields and woods afterwards, trying to work off the fatigue that comes with eating so much.

In June 1999, my husband died suddenly just after his 56th birthday.  That Thanksgiving, it was pouring rain.  Susan was with me, and I was driving a Toyota Forerunner.  My niece Nell and my daughters, then 16 and 22, were in Nell's car behind us.  Out of my rearview mirror, I saw a car coming way too fast and out of control.  He was what I called a "weaver and speeder".  I knew he was going to hit us, and he did, miraculously not turning us over, but knocking us so hard that we crossed two lanes of traffic.

The car was hurt, but we were not.  The worst thing that happened was that my children saw it all and thought they were about to be orphaned.  It turned out that the only casualty was Susan's pumpkin pie and whipped cream topping which ended up all over the cargo area.

Thanksgiving will be good tomorrow.  Two families are coming, and my daughters are here along with one boyfriend.  I'm over the sadness now, and I'm looking forward to a joyous day tomorrow.  Four years ago, there were only three of us.  Tomorrow we are ten.

I realize that Thanksgiving will change again with the passing of the years.  For now, though, I'm not going to go there.  I'll just appreciate the present, remembering those who were there over the years, and cherishing my friends and family who are here now.  I hope tomorrow is a great day for everyone.