Thanks to an American treasure 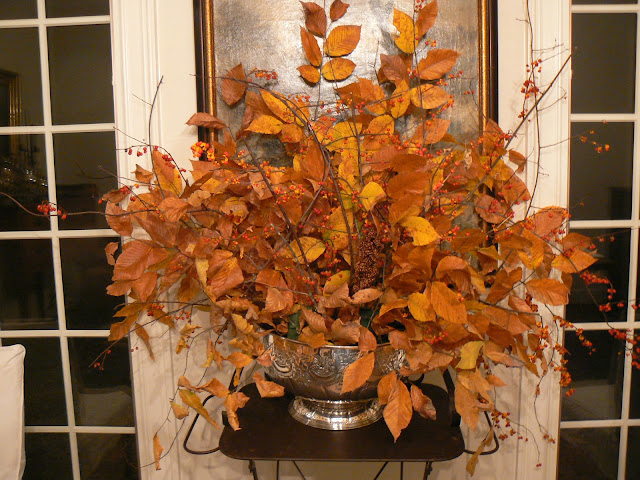 The beeches beat me this year.  Usually at Thanksgiving, the ones on this property still have mixed fall colors of yellow, orange and bronze with the lingering bright green of summer.  Those branches are always the prettiest, and I go from tree to tree to choose the showiest combination.

This year, the beeches turned earlier, but they have been breathtaking.  Driving from my house to the grocery store has been like passing through a tunnel of gold.  My neighborhood, which is rather close to the Chattahoochee River, must have conditions beeches like.  In late winter, when the leaves turn a light silvery ecru, you are especially aware of how many there are.

Every Thanksgiving morning, I go out with my loppers to gather branches to put in this silver punch bowl in the dining room.  One year, I had some red rose hips mixed in.  This year, I cut some bittersweet from the side of a road near my house.  I also fished some millet (or is it sorghum?) from the trash barrel at church.  I meant to stick some more pieces in, but I see I only put the one.  I was in a hurry.

There are some gorgeous specimen beech trees (Fagus grandifolia) in Atlanta.  Mine are all in the woodland, so the tall ones don't give you the full effect as ones in parks or that have lots of room to spread.

A story about a specimen American beech:  Up on the hill next to me was a huge stone lodge.  Allegedly, it was a summer home for one of Georgia's governors around the turn of the century.  Coincidentally, the people who lived there when I moved onto this property had lived for a time out in the country from my home town of Palmetto.  The man was a friend of Daddy's.  If I remember correctly, he was a fishing tackle salesman, and Daddy would bring him home for a noon meal at our house.  He was very loud and jovial and from somewhere up North.

His wife was quiet and shy.  Once, we went to their antebellum house at Christmas time.  The man asked if I'd like some grape juice, and I said yes.  He brought me a glass, and I took a sip and gasped.  Mother gave me a hard stare, and I struggled to drink the horrible liquid.  When I was about finished, the man came over and grabbed the glass from me.  "So sorry. I gave you prune juice by mistake." He laughed, and called me a good sport.

Anyway, back to the beech tree.  The woman turned out to be some sort of hoarder.  She never let me inside the stone lodge, but one day she did invite me up to see their beech tree.  I had seen it many times before from a distance, but never up close.  It was the most magnificent tree I'd ever seen.  It was fall, and it was a riot of color, and the silver trunk was smooth, thick and beautiful in its own right.

A couple of years after that, her husband died, and she was put in a home somewhere.  The house was abandoned.  On weekend nights, I could hear teenagers up there, having loud parties.  There would be screams from girls, presumably frightened by the labyrinthine tunnels of newspapers stacked to the ceiling or by the sounds of someone banging on a grand piano that had been left behind.

On Saturday, November 14th, I was lying on the sofa in my den.  It was very early in the morning.  My three dogs were going crazy.  There were cracks and pops, and at first I didn't bother to get up to see what was happening.  When I walked to the window, I saw a huge glow in the dark sky.  "What a fabulous sunrise", I said to myself.  Then it hit me.  That's not where the sun would come up.  The giant house was on fire, and flames were leaping up into the sky.

I called 911, and it seemed like it took them forever to come.  I got out my video camera and taped a commentary.  It was so sad that the historic house was being destroyed (the past evening had been Friday the 13th; the teenagers might have built a fire inside.  Who knows?)

Long story short.  The granite sides held up pretty well, but the interior was totally gutted.  When things cooled down, the dogs and I walked up to see.  It was shocking enough to see everything in ruin, but then I looked at the beech tree.  It had caught fire and burned so that it was hardly recognizable.  I was sick, thinking how such an old, fine tree had come to such an ignominious end.

All this to explain my Thanksgiving arrangement.  I don't know why I started rambling.  I will add one more part to this story.  Daddy told me how strange the woman had been, even when they lived down home.  The rumor was that she had a baby who died, and that she buried it under the steps of their historic house.

Here's the odd thing.  That house burned, as well.  I think that's why they moved to Atlanta.  The whole thing is very strange indeed.  It was such a blow to see that beech destroyed, but one good thing came out of the ruins of the lodge.  I got permission from the son of the couple to take the granite siding from the house.  I worked for weeks on this, hauling heavy stones down the hill, or filling up my husband's decrepit pick-up truck with the gray granite, which was cut mostly into different sized rectangles.

These rocks have been piled up along my driveway for decades.  One day, though, when I'm ready, I'm going to build myself a stone cottage.  I don't know where or when, but I do think it will happen sometime in the future.  It would be nice if there were a lovely beech tree next to it, preferably one that is already a hundred years old.  But, I like the small trees, too, so one of those would do nicely.