My heart's on fire 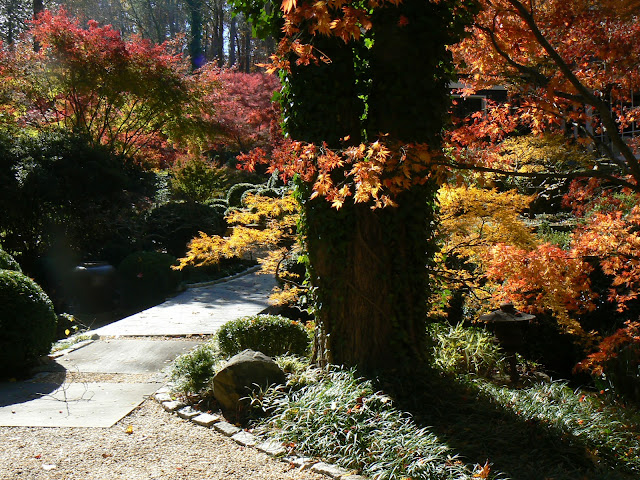 It was cold and windy Saturday morning when I set out for Bill Hudgins' garden.  I stopped along the way to take a photograph of a large, picturesque ginkgo tree I'd been watching for days.  I figured it would be all yellow and at its peak by Saturday.  I was right.  But, what I hadn't figured on was the ire I drew from drivers when I parked on the side of a cut-through street.  I had my flashing lights on, and I was down far enough, away from the corner, but still.  It was very unpleasant, listening to people blowing their horns.

I got my picture, though, which I will post here at some point.

Today, I have to talk about Bill Hudgins' Japanese maples.  He had given me permission to come back and said he had pretty much kept up with the falling leaves (unlike at my house, where everything was covered).  But, on Saturday morning, the wind was gusting pretty hard, and leaves were raining down in Bill's garden.  I could hear a couple of blowers going and could see workers about.  There was no way to keep up with everything, but it really didn't matter (except for that branch you see in the above photograph; I didn't notice it when I snapped the picture).

So, I took my time and stayed in the front gardens.  I noticed immediately that the leaves on the trees I'd photographed a week before had mostly fallen.  But, there were other trees that had turned and were at their peak.  I ended up going up and down paths, shooting a lot up to the sky towards the sun to get a backlit effect.  A couple of times, I lay down on the ground to get my shots.  I felt foolish, indeed, but not as foolish as I felt when I stepped backward off a rock and almost went over into the stream.  Bill had warned me about being careful, but I was so concerned with getting this one filigree type yellow maple against a green background, that I didn't pay attention.  No harm done, but I came close.

All the while I was going through the garden, I had a line from a song (the version I have is by Billie Holiday) stuck in my head.  "My heart's on fire, the flame goes higher," kept playing over and over in my mind.  It was like I was a crazed person snapping away at one tree, and then I'd see one even more fabulous, and go running the other way.  It did look at times like the woods were on fire, such were the colors of the leaves.

The wind never let up, but I got some great, fiery (to go with my heart) pictures of Japanese maples.  The photo above is one I took as I was leaving.  It's the entrance to the garden and gives you just a taste of what lies beyond.  That's the bridge across the stream (not where I fell; that was upstream).  On the other side, you enter a magical place where just about everywhere you go, you see something wonderful.  Thank you, Bill, for creating all this beauty.
Posted by Martha Smith Tate at 1:00 PM