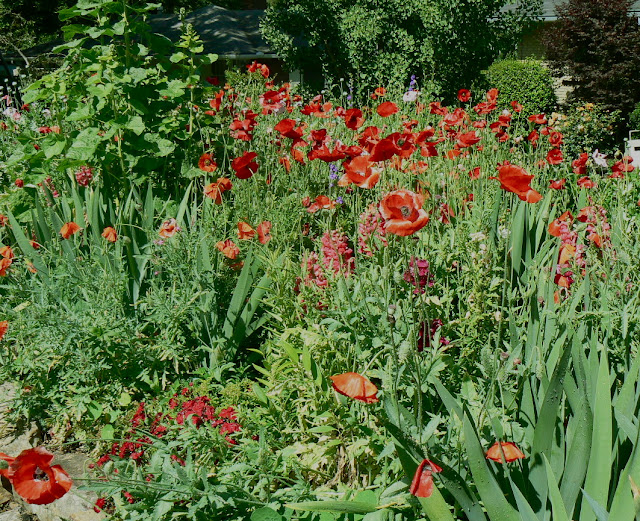 Being from a small town (I mean, very small, pop. 1,500 when I was little), it seemed like every experience was huge.  Maybe it was like that in the cities, too, but the characters in my town loomed large.  I remember as if it were yesterday the poignant sight of the WWI veterans sitting in front of Moseley's store selling red plastic poppies on Armistice Day, November 11. That's what we called Veteran's Day back then.

I was gone all day today, rushing to church, then hurriedly swallowing a sandwich in time to go to Newnan for a meeting with my high school class. I didn't get back until after dark.  So, I didn't take time to call my dear Uncle Claude, my mother's youngest brother on this special day.  He fought in World War II, and spent a dreadful winter in the Vosges Mountains in France.  Letters back to my grandmother sounded as if he were on a picnic.  She never knew about his crawling into a latrine pit with a German and what happened there.  Nor, did she know that he had no warm clothing to get him through the frigid nights, or how he had to crawl across the forest floor, sometimes hiding under the snow from the German foot patrols.

Georgia Public Television did a wonderful service by videotaping many of the Greatest Generation.  Uncle Claude was among them.  He was so modest in his interview, sounding as if it was all routine.  But, in our Veterans' Day conversations, he described in great detail these horrifying experiences.  I don't know how any of them survived that terrible winter.  He did, though, and made it all the way to Berchtesgaden.  He has a huge swastika flag which he obtained (one can imagine how) from an SS officer.

My Uncle Claude is a gentle man.  He never saw himself as a hero, but just did what he had to do.  Now, at age 89, he has some dementia.  My aunt puts him on the phone, and he greets me in that wonderful warm way, so glad to hear my voice.  He thanks me for the call, and then he asks how my mother and daddy are (they are both deceased).  It always startles me that this brave, sweet man's memory is fading.  It's hard to believe, because he took care of his sisters' and his aunts' estates, and was the backbone of that family for so long.

Tomorrow, I'll call him, and he'll be gracious and kind and say, "How are you doing, gal?"  I know he's slipped a good bit since our last conversation, but I hope I can get across how much he means to me and how much I appreciate how at age 18 he risked his life for his country.  If he remembers, he'll downplay the danger and say, as always, that he was one of the lucky ones who got to come back home.


In the above photograph:  Papaver rhoeas, also known as Flanders Field poppy, in Bob Clinard's Atlanta garden.  Native to Europe, corn poppies bloomed in the trenches along the Western Front in World War I and became a symbol of fallen soldiers.  In May, Flanders Field poppies are a common sight in fields all over Europe.