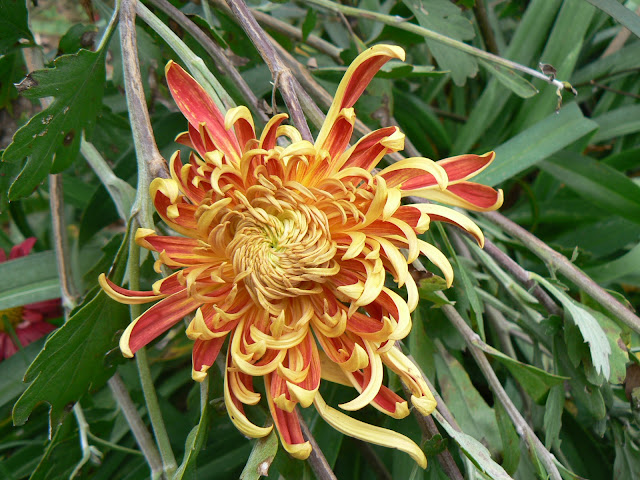 The moment I stopped opposite Carl and Vosco's house, my heart started beating faster.  From that distance, across a busy rural road from their driveway, I could see the flowers in back.  They looked like colorful lollipop trees.

I drove up, unannounced, and went around to the back door.  A flock of gourmet chickens (all exotic looking) were gathered around, obviously waiting for a handout.  When I walked up, they scattered, all except one.  She was tan and brown and fluffy, with a row of feathers around her ankles (do chickens have ankles?).

Carl came out of the house and greeted me warmly.  I had come to see Vosco's chrysanthemums.  Vosco wasn't there, but Carl told me the story.  It's a familiar one I've heard many times in the course of doing interviews for the newspaper and for A Gardener's Diary.  So many gardeners grow the same flowers their mothers and grandmothers loved.  In Bulgaria, where Vosco grew up,  people were flower crazy.  Vosco's grandmother would plant all kinds of chrysanthemums for the fall garden (she also had roses, lilies, peonies and many types of vegetables, as well; Carl showed me a big, light green pumpkin that she had grown back in the old country).

Vosco has a collection of chrysanthemums that I'm sure would make his grandmother proud.  I wanted every one.  Some reminded me of football mums; others were brightly colored daisies.  Most had been tied up to fence posts and cascaded down from a height of five feet or more.  It was a thrilling sight.

Years ago, I had done some articles on chrysanthemum growers around Atlanta.  I would go to their yards when they were getting ready for the annual cut flower show.  I'd never seen such flowers.  I joined the Chrysanthemum Society, thinking I was going to be one of those growers (where did I get the notion that I had enough sun to produce any blooms, or the patience to do all that pinching at the right time?)

I received catalogs for a couple of years, marking all the flowers I wanted (practically the whole book). Now, I want to be a chrysanthemum grower like Vosco.  I want armloads of flowers to cut and bring in the house or take to people.  Vosco has early types, which had already bloomed out, but there were several that were at their peak. He even has ones that have crossed in the garden and made new and interesting colors and patterns.  I ran from one to another, snapping pictures as fast as I could.

The touching thing about these flowers is that they remind Vosco of his homeland and of his family and how it was long ago when he was a child.  He has been able to bring back seeds of things his mother and grandmother grew.  This must be a wonderful connection for him.  Seeing his flowers was a powerful reminder of just how a special iris or a rose a neighbor grew can bring back memories of long ago and people who were dear to us.  Another reason to have a garden if you have the time and space.