Lovely on the ground, too 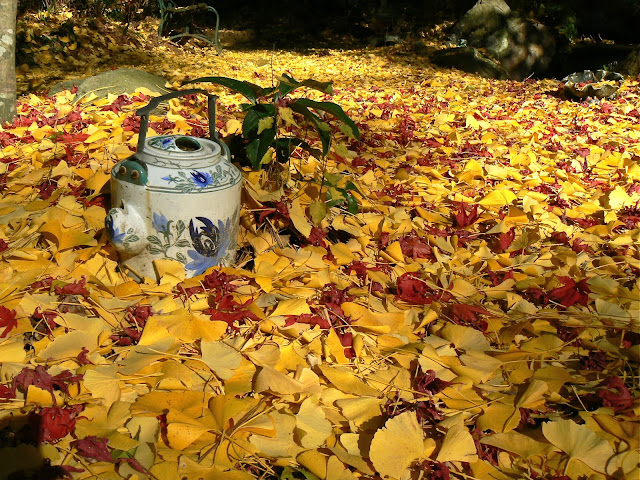 It didn't happen as usual this year.  The leaves on some ginkgo trees around the area didn't drop all at once.  After the foliage turns completely yellow, a few leaves always sprinkle down to give warning.  That did occur this year, but instead of the whoosh of all the leaves falling at once, a few more fell, and then more, until at last, after several days, most landed on the ground.

I checked several times with 96-year-old Margaret Moseley earlier this month.  For her, the falling of the ginkgo leaves is an event she looks forward to every year.  In fact, she doesn't let anything get in the way of "the drop".  Not even Thanksgiving.  She laughs when she remembers the look on the face of one of her daughters when she announced one year that if the ginkgo leaves didn't fall before Thanksgiving Day, she was not leaving home to come to dinner.

Margaret sensed that this year would be different.  She knew it was going to be perilously close to Thanksgiving Day, but she also thought there wouldn't be the grand finale as in every other year.  It's her habit to have a chair ready for the viewing.  When the leaves all come raining down within a matter of hours, she's right there looking at the spectacle just outside her glassed in porch.

Still, most of the leaves on the giant tree fell on Friday.  Some were still hanging on yesterday.

"When I planted this tree, it was no bigger than this cane," Margaret told Ari Douthit, who was visiting here from New York and went with me to her garden.  "That was 30 years ago."

I took this photograph yesterday, and you can see why Margaret enjoys the aftermath of the fall about as much as the event itself.  The entire ground was golden.  In the above area, some leaves of a Japanese maple were also mixed in.  All in all, everywhere you walked in the vicinity of the tree held a visual delight.  The ginkgo leaves felt like silk, and the whole experience of being there under this tree dating from ancient times was other-worldly.