Letting go of the season 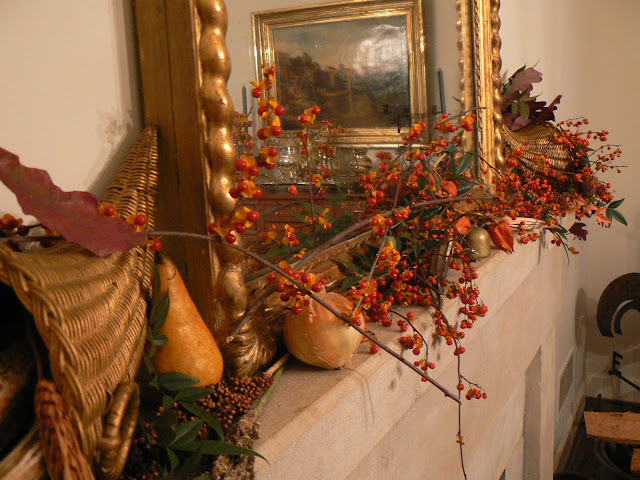 I just walked into my dining room and realized I had to let go.  The fall season is over, essentially, even though it will officially be autumn until almost Christmas.  People around here already have their mailboxes wrapped in pine and fir.  Many neighbors have hung wreathes on windows and doors, and the person who finally bought the spec house built before the housing collapse, has outlined some newly bare trees in white lights.

Still, it's hard for me to think about dismantling my mantle.  I've had fun every Thanksgiving since I inherited my mother's gold spray-painted cornucopias.  Mother used them as a centerpiece on the adult table at home.  She made them back in the fifties when Miss Sally Hutson was the floral design instructor of the Palmetto Garden Club.  The same plastic miniature pumpkins, lemons and oranges are there.  The berries that don't mimic anything I know of in nature are still stuck in the styrofoam blocks inside.  The soft, pliable grapes that actually did look real are nowhere to be found.

So, what I do is cover up the plastic fruit with dried things I've gathered (i.e., okra from the garden at the farm), along with fresh fruit and berries (this year, I broke off some orange nandina berries from the barber shop in Palmetto).  For the last several years  I've had the round yellow fruit from the hardy orange, Poncirus trifoliata, which unfortunately is gaining ground out near the stick pile.  This year, they ripened early, so I had to throw away all the ones I gathered.  Last year, I had picked basketfuls of green tomatoes when I knew there was about to be a freeze.  Some had turned the color of persimmons and looked like they belonged with a fall collection.

This year, I was in a hurry and stuck bosc pears and a couple of onions on the mantle, along with some little orange lantern things I rescued from the trash can at church.  I usually have some walnuts or pecans around, but not last week.  I did put a couple of buckeyes from the farm on the mantle.  Last year, I had black and red peppers, but they had already frozen by the time I thought to pick them.

Out in front of my house is a small oak tree with giant red leaves (I haven't a clue what oak this could be).  Those served as the backdrop for the cornucopias, situated at either end.  I picked some nandina foliage to have a touch of green and then topped everything with bittersweet, which I found tangled up with kudzu on a hillside near my house.  There were some cattails and some pieces of sorghum in that same trash can at the church, so I added those to the cornucopias.

One embarrassing fact.  I went to vacuum in the dining room before I brought anything in and  discovered some hulls from last year's bittersweet stuck between the pine boards on the floor.  This says volumes about me, I'm afraid - that I'm more interested in decorating than I am keeping up with any cleaning chores.  This is not good.  When I take everything off tonight, I'll make sure to clean thoroughly.  I've got to get ready to put up the cedar garland.

Second confession.  I found some pieces of last year's Christmas greenery, too.  Some fir needles were stuck between the pine boards, as well, and there was some dried holly in a carved out log on the hearth.  I vow this isn't going to happen again.  It's just that gathering all the natural materials is so much more fun than cleaning it all up.