Dahlias conjure up a ghost story from long ago 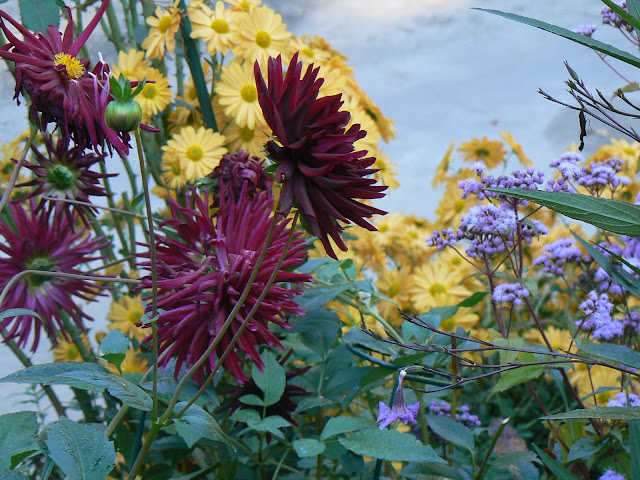 I'm back in Diana Mendes' Atlanta garden.  I was taken with all the colorful flowers she had packed into a rather small front yard.  Yet, it seemed that each flower was in the right place and had room to grow and be appreciated.  I love the above combination - very insouciantly done, but so charming.

In this photograph is something that reminds me of my grandmother.  It's those dark burgundy dahlias.  Granny Smith, who lived in a little cottage down the lane from us, had a row of them along the side of her house.  I don't think they were the cactus kind like Diana has, but they were the same color.  I loved to take scissors and cut them.  She never minded.

One story about my grandmother.  She was my father's mother and moved to our little town from way out in the country, from a rural area called Rivertown (not even a crossroads, but a section that bordered the Chattahoochee River).  She came, along with a couple known as Uncle Mark and Aunt Julie, when my parents moved from the country to town.  I'm not sure what my mother thought of this, but that's the way it was back then.  My grandmother was a widow early on.

So, all my early years, until I was 16, in fact, I had my Granny Smith right there.  She made the best sorghum syrup candy when the weather turned cold.  We would pull until it became very light tan in color.  She would cut ribbon-like pieces and wrap them in wax paper.  It was chewy, sort of like taffy.

She died on her 86th birthday - Valentine's Day.  Her cottage remained empty.  The next year, on the night of February 14th, I was looking out our kitchen window toward her house. All of a sudden, a light came on in her bedroom.  I was home alone.  I think Mother and Daddy must have been at church (it was a week night), and I had no way to call them.  I was petrified.

They finally arrived home, and Daddy and I went down there.  The doors were locked, and he took a key from his giant key ring and opened the back door.  My heart was pounding.  Only the light in her bedroom was on.

Okay.  This is a letdown.  We didn't find anything out of order.  There was her bed, still neatly made up.  There was no impression of anyone having lain down (like happened to me a few years ago at my friend Linda Jackson Carter's historic house in Maryland, which really is haunted).  I'll never know why that light came on, but I'm very sure there was something to it.  It never happened again, thank goodness.  I don't believe my heart could have taken another scare like that.

Back to the dahlias.  In Diana's garden, you can see yellow daisy chrysanthemums and tall blue ageratum.  Diana hasn't a clue where the latter came from, but it's a typical occurrence.  I have it in two places here;  it appeared after several years' absence.  It tends to do that.

Diana is planting more dahlias next year, so it will be interesting to see the combinations.  I can't imagine I'll have another ghost story to go along with anything, but one never knows.