A bench in time 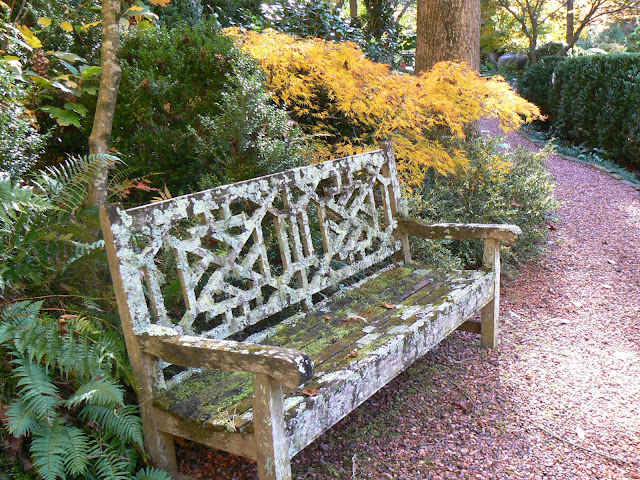 I doubt that Bill Hudgins has had a lot of time to sit on this bench in his garden.  In fact, I'm guessing that no one has sat here in a long time.

But, the picture reminded me of something. I am continuously trying to fight the "I should have" speech that I so often lapse into.  The way I talk sometimes, you'd think my life is one big regret of roads not taken.  It's not, but there are things I still stew over.  Like the fish painting I didn't buy with my Christmas money one year.  It would have looked so good in my kitchen.  I waffled while I was in the antique shop, went home and realized I couldn't live without it.  I went back to the store, and it was gone.  The shopkeeper said, "Oh, one of our best customers just bought it.  She saw it and just had to have it."

To this day, I look at the blank space where that painting would have hung and remember the sting of walking in and seeing that the painting was gone.  Nothing life-changing or serious, but I sure wish I had bought it.

Back to the bench.  I read on Facebook that one of my friends has a paved driveway a half mile long (she lives on a beautiful farm and is a great gardener).  Her post reminded me of something.  I moved to this property when I was a new bride.  We lived in a 1926 cottage at the back of the lot.  Our unpaved driveway was 1/5 mile long.

Then, nine years later, we built another house, about halfway to the street.  That left a good part of the driveway, a part that was flat and pretty long, as an approach to the new house.  My husband did not want to pave it, and I did.  I wish I had insisted.

And here's why.  Children couldn't learn to ride a bicycle on a gravel driveway.  My older daughter was six years old before she learned to ride a two-wheeler.  I had to take her over to a school parking lot so she could practice.  Finally, they blocked off the area, so we had to give that up. There was no place for her to ride.

When I was little, we rode everywhere in my small town.  I could go up and down my little private street for hours, practicing all kinds of tricks (Note:  never tie an English setter to your bicycle and expect to come out without severely skinned knees).  We also had a great place to roller skate that was nearby.

So, my regret?  That we didn't invest in asphalting the driveway because we didn't think it would look good with our house.  What a difference it would have made for my children.  They could have spent hours roller-blading and riding bikes.  We could have put up a basketball goal.  Instead, we didn't want to change the look of the 4,000 cobblestones that made up the front parking area.  It was hard enough to walk across the things, much less to ride a bike on them.

Here's what I should have done (with apologies to my friend Kathryn, who always got after me for this kind of talk):  Paved the front driveway and put a bench in a space about halfway down the drive.  I could have sat there, caught up on reading while my children played or just enjoyed watching them have fun.  I could have used the in-line skates I got for myself (they're still in the box, untouched, along with the elbow and knee pads).  Well, it's probably for the best that I didn't try to roller blade, as I was used to skates with four balanced wheels.

Remember that line from the song by Tyrone Davis?  "If I could turn back the hands of time."  Well, if I could do that, I would have a garden bench alongside my driveway and would watch in delight as my children whizzed back and forth by me.  If there's anyone out there who chooses the atmosphere and beauty of the approach to your house over fun for children and ultimately for yourself, please reconsider.  Likewise, if you have children and a yard, make it a great place for them to play.  The beauty can come later, and you'll have all those memories, besides.