Where the trucks have trouble, the aster grows 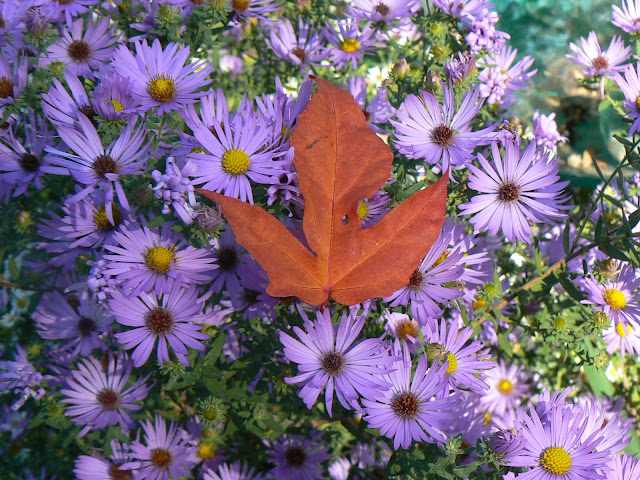 Last weekend was my college reunion at Vanderbilt University.  My friend Jane Hindman Kyburz (my little sister in our sorority, Kappa Alpha Theta) drove me up and back to Nashville.

On the way there from Atlanta, we passed over the mountain at Monteagle and started downhill.  This part of the trip is tricky.  Big semi-trucks have a tough time on both sides.  As we descended the mountain, I looked to the right where there is this beautiful valley that stretches for a long way.

When I first entered as a freshman, there was no Interstate 24 going from Chattanooga to Nashville.  We had to take U.S. 41, which was a treacherous road.  Seems I remember that it was three lanes, and part of the time, you would take the middle one to pass.  I know it was always scary, and big trucks usually had you backed up on one side and were right on your bumper on the other.  The whole trip from Atlanta to Nashville took six hours, mainly due to this part of U.S. 41.  There were tons of little tourist places that featured snakes or bears or other kinds of animals.  The road hugged the side of the mountain, and you took your life in your hands to pull off anywhere.  Suffice it to say that I wouldn't have been looking at wildflowers at age 19 or 20, especially when I was in fear for my life.

Coming back the other day, though, I was able to look over into the forest on the side of the mountain.  I couldn't believe it.  Wild blue asters were everywhere.  I'd never noticed them before. There's something so thrilling about seeing scads of native wildflowers growing with abandon.  These asters, similar to the ones above, were mostly along the edges of the woods.  There was no way to stop and explore (not the time to do it anyway; we were exhausted).

This part of Tennessee (which is such a beautiful state) has lots of caves and native flora.  Once, when my daughter was a student at the University of the South in Sewanee (at the top of this mountain), our family explored several of the caves.  It must have been spring, because we saw all kinds of native heuchera in bloom, and blue Phlox divaricata was strewn about the forest floor.

I took the above photograph in Diana Mendes' Atlanta garden.  She had several clumps of blue asters, all some sort of American native.  The blue flowers were a perfect backdrop for her pastel chrysanthemums and orange and pink roses.  Diana doesn't keep a record of the names of her flowers (if she sees something she likes, she buys it), so I'm not sure which one this is.  There are several good blue daisy asters - 'October Skies', 'Bluebird' and 'Radon's Favorite' - to name a few.  All are charming American flowers that look great in a fall garden.