Oh, to find this exact plant! 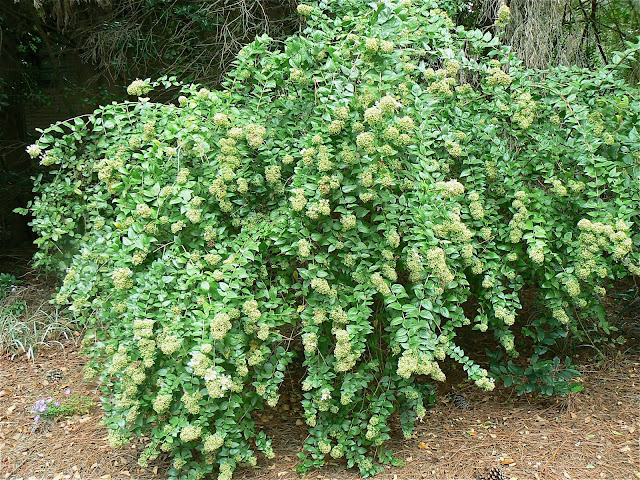 I rushed out to Margaret Moseley's this morning to pick up some newspaper and magazine clips.  If I could just get focused and organized, I want to write a book about Margaret, who has inspired a generation of gardeners.  She loaded me down with publications featuring her garden.  I'd forgotten about some of them - even ones I wrote.  As Danny Flanders, former Home & Garden editor at the Atlanta Journal & Constitution, said, "Margaret is a garden writer's dream."

It's true.  She has so much good advice to offer and so many funny stories to tell that it is going to be a challenge to pull everything together.  You find that you don't want to leave anything out.

I remember one day I was out there, and Margaret was acting distracted.  Finally, she confessed that she was anxious because the baby blue birds were going to fly out of their box any second (what is the word for this?  I can't think. You birders will know immediately).  Anyway, we were standing right by the box, and all of a sudden a head poked out.  I put my camera up and caught the baby just as it was half-way out of the hole, and then it was gone.

Margaret finally confessed to me that she had wished I wouldn't come that day, as she was afraid she'd miss out on the event.  In the end, she was happy I had caught the action.

Today, as I walked to my car, I stopped once more at Margaret's Chinese abelia along the driveway.  I have admired this shrub ever since I saw it at the Atlanta Botanical Garden years ago.  It doesn't look like any abelia you're thinking of.  This particular shrub looks like a fountain, with lilac shaped flower clusters.  The blooms form in July and are white and pink.  By this time of year, they've faded to green.

I've seen very few of these in Atlanta.  I bought one, but it is not the same as Margaret's.  It's nice, but the flowers aren't in the shape of pointed clusters.  Kathryn MacDougald had one that with the flowers in ball-shaped clusters, and it was really good, too.

I met a gardener in Raleigh, N.C., where the shrub is very popular (perhaps because of the proximity of the J.C. Raulston Arboretum, where they say this particular abelia attracts more butterflies than any other plant on the grounds).  When I said we hardly ever saw Chinese abelia in Atlanta (he had several like Margaret's), the man was incredulous.  He thinks, as do I, that it should be in every local garden.

Apparently, this abelia is not as hardy as the hybrids, but I read somewhere that it is growing happily in the Brooklyn Botanic Garden in New York.

I will continue my search for one like Margaret's.  I had tried to layer it, but it didn't work.  Now, I need to try to root it.  This would be a great cut flower for our arrangements at church.  My friend Benjie cut some of mine for an arrangement, and it held up beautifully.  This was earlier in the pink and white stage, which was nice.  My very favorite, though, is this cascade of green.  On one side is yet another fountain of Camellia sasanqua 'Pink Snow.'  Talk about a fabulous combination.  Margaret really has an eye for beauty.  I hope I'll be able to convey this amazing talent very soon.