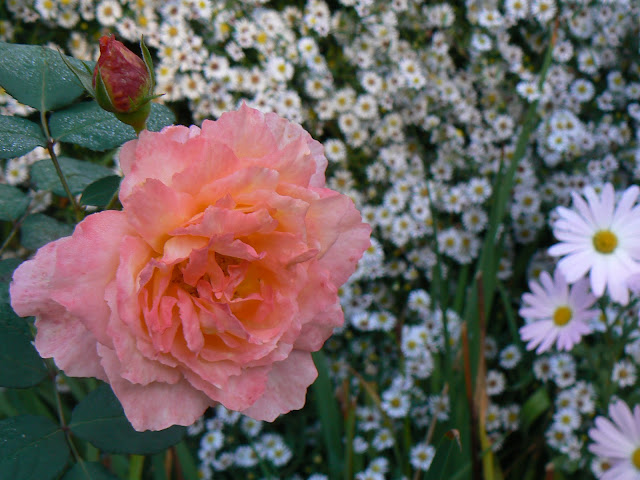 It's fall, almost November actually, and who would think the above scene (photograph taken yesterday morning) could exist?  This is only the tip of the iceberg.  Diana Mendes' garden in Virginia-Highlands is overflowing with colorful flowers, so many, in fact that I made 104 pictures and would have made more, but my camera battery ran out and Diana needed to be on her way.

I kept asking Diana the name of this rose or that dahlia.  Diana says she buys what she likes and doesn't worry about labels or keeping a log of every flower.  That's understandable, given the amount of plant material just in this October garden.  And, this is not even considering the breathtaking display of poppies, peonies, larkspur and roses (and dozens of other April-May flowers) in this very same patch of ground.

Because she has plants from so many sources, surprises pop up now and then.  Look in the blurry background of this photograph.  The little white daisy-type flowers are part of a huge patch of wild looking asters that appeared this year.  In fact, there are two such clumps that take up a good deal of space.  Diana says she has no idea where they came from.  They'll get to live out their bloom this year, but if they appear next year, they'll have to be culled from the garden.  "There are too many things I want to plant," says Diana, who is thinking of adding more dahlias to her growing collection.

I photographed Diana's garden on October 29th of last year.  There's no trace of the white asters.  The roses look different, too.  I don't remember seeing the one in this photograph.  And, some red roses that grew on a short, compact shrub last October were much taller this year.  Diana had also planted more dahlias.  Mexican sage, which actually survived the winter, is a dominant feature in this year's border, as well.   I didn't get the full impact of the latter, Diana says, because a lot flower branches were broken off in the rains that came a couple of weeks ago.

In tomorrow's post you'll get to see a display that is pretty amazing.  Diana bought only one plant, but you should see what happened.  She can't explain it, but the flower must have liked the conditions in her border along the driveway.  Be sure to check back for more from this spectacular garden.