Variation on a familiar native flower 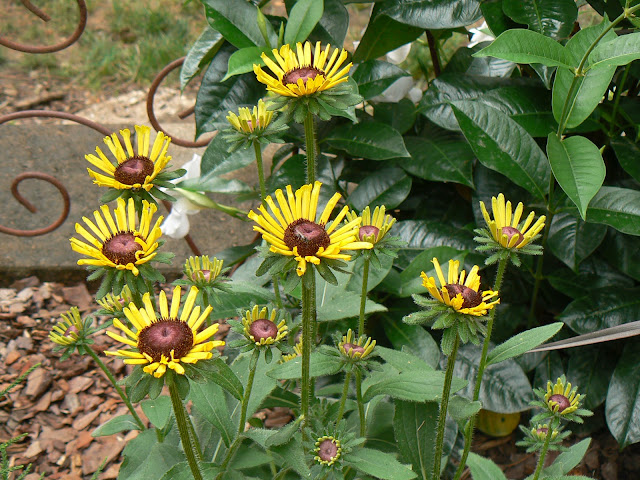 On October 15th, my City of Atlanta taxes are due.  So, it doesn't seem right that I walk outside just now with my two dogs, who are looking over in the direction of the deer trails, and I glance to my my right, and what do I see in the lower lawn?  Three wild turkeys!  One nestles down into the grass.  The other two stand stark still.  I pray the dogs won't see them.  They don't.

I know this isn't New York City, but it's getting wilder every year here in Atlanta.  The dogs continue up the driveway to the little house, which we do around 5 p.m. each day.  Almost always there are deer about, so the dogs go flying into the woods. Not today, though.  On the way back down to the house, I hold my breath.  Maybe the dogs won't see the wild turkeys.  I should have known better.

Willa (who looks like an Australian dingo and is named for Willa Cather) is just too observant.  She stops, her ears go up, and she starts bounding through the trees.  Norman, the springer/Australian sheep dog (they are both rescues, so I don't know exactly what they are) follows in hot pursuit.

Then, the noise of the turkeys (my daddy had a wild turkey caller, so I know the sound well) and the fluttering of wings.  I never knew turkeys could fly so high.  They got away safely, way up into the trees.

I'm glad to say no harm done, but really, where did they come from?  I had one come last winter, so I guess I'm going to have them in residence now.  They may not like it here since Willa is around.  Norman is no threat.  He chases after them for a few moments, then remembers he wants his supper.

So, all of this has nothing to do with the photograph above.  I've had two shots of this flower, one from a nursery and one from a garden.  As is my usual practice, I failed to label either of them.  I knew they were probably a rudbeckia, but could they possibly be a type of gaillardia?

Then, as I often do, when I was desperately looking for something else, I came across a third photograph, which, miracle of miracles, I had identified.  This is Rudbeckia subtomentosa 'Henry Eilers'.  It is unusual in that the petals are in the shape of a quill.

The original flower was found in southern Illinois next to a railroad track.  The flower may well be a part of a remnant of an original prairie.  A few of them do exist where the ground has never been plowed and cultivated.  Apparently, according to one Web site, some virgin prairie remnants lie along railroad tracks dating to the 1800's.  This was the case for this rudbeckia, which is named for a retired nurseryman who discovered the unusual form.

I definitely want this plant.  It is five feet tall (although it doesn't look to be in this photograph) and has straight stems rising from a basal rosette.  It is at its best in August and September.  I'm thinking it would look great with the yellow patrinia, some iron weed, Aster tataricus and sun-loving ferns.  But, I'm also really interested in it as a long-lasting, sturdy cut flower.

So, put this on your list of perennials.  You would be ahead of the game to obtain it in the fall and then watch as the stalk rises from the rosette in June.  Then, by the time the garden is on the wane, here come these tall, festive flowers.  This type of rudbeckia is native to the heartland, from Texas, up through Arkansas, Missouri, Illinois and on to Michigan.  It is most prevalent in Illinois, according to Ridgecrest Nurseries' Web site.  That's where I found the best description of the provenance of this black-eyed Susan.  That's the thing about gardening.  There's always something to look forward to, and a plant you don't know seems to be around every corner.
Posted by Martha Smith Tate at 3:31 PM