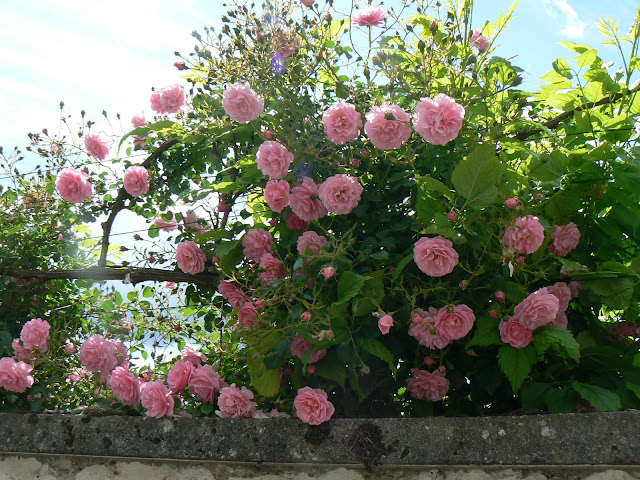 The first February after I got married 39 years ago, my husband and I fell victim to the packages of roses at the grocery store.  We selected several in different colors and planted them in probably some of the worst clay on the planet.

When May came, we were disappointed.  What had been a space with full sun was now in deep shade, thanks to the leafing out of a giant oak tree.  I'm thinking we did have some blooms that year, but the plants suffered from black spot, and all the foliage had fallen off by the end of the summer.  We were left with spindly bushes (if you could call them that) which, in two or three years' time, had succumbed to the poor conditions.

Fast forward to last fall, when I came home to find a 40 foot long branch (it could have been a whole tree, given its size) lying in my driveway.  It had fallen from a 100+ year old white oak tree.  I had the city arborist come out to give me an opinion.  It was the second such limb that had come down.  The man said the impossibly tall tree, part of which hung over my slate roof,  had to to be taken down.  The only good part to the expensive procedure was that I avoided the pounding of acorns on the roof, which had always kept me awake and filled the gutters to the max.

This summer, I realized that I now have a spot for a climbing rose at the corner of my house.  I have full sun there, now, starting in the morning.  And, now I know better than to leave the soil unimproved.

The problem is zeroing in on which rose.  I know I don't want a thorny monster like 'New Dawn' (although it's so beautiful and reliable here).  My house is stucco with limestone trim, so it's sort of a beige-gray.  I really ought to opt for a red rose, but there aren't any I'm in love with (I do like 'Dortmund', but I want a double flowering rose).  'Zephirine Drouhin' is not quite the color I want, although it's close, and I love its fragrance.  I need to check with Erica Glasener, who grows this rose at her house on the other side of Atlanta.  I'm concerned about whether the rose does well in our heat and humidity.

What I'd like is a big, double cabbagy rose like the one in the photograph above.  Maybe it could be a shade darker, although I'm okay with this pink.  It needs to be fragrant, and it can't be a rambler that would go everywhere.  I would be able to see it from where I'm sitting right now, and I could open the window in spring and catch its fragrance.  I would like a repeat bloomer, of course, which would give me a big spring show, some sporadic blooms in the summer and another flush of bloom in October.

So, if there's someone out there with a suggestion, I'm open.  I do need to call Pat Henry at Roses Unlimited in South Carolina to see what she would recommend.  In the meantime, when the weather turns cooler and the humidity is down, I'm going to work on the ground at the corner of the house.  This time, I'm going to be prepared and give the yet unknown rose a good home.
Posted by Martha Smith Tate at 10:15 AM