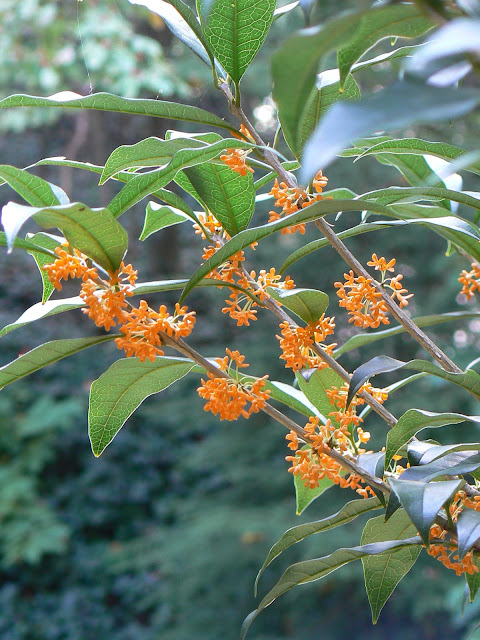 The moment I opened the car door on Sunday night, I knew what had happened.  While I was gone for a week to Pawleys Island, S.C., with my daughters and their friends, the orange tea olive (Osmanthus fragrans var. aurantiacus) had come into bloom.

The perfume, which is sweet and unmistakable, has a tinge of orange essence.  Or, is it because I know the flowers are orange, I just imagine the fragrance is imbued with orange or tangerine?

The most amazing thing about this evergreen shrub, which was given to me well over a decade ago by Erica Glasener, host of A Gardener's Diary on HGTV, is the reach of the fragrance.  Where I park my car is on the opposite side of a two-story wing of the house.  One would think that the structure would block the perfume, but it must waft through the air a great distance.

I have noticed that the orange flowers (this year's crop pictured above) are a much deeper color than usual.  In years past, especially when the shrub was young, I would have described the flowers as light apricot.  Now, they are a deeper tangerine color.

I also have Osmanthus fragrans 'Fudingzhu', which is supposed to have the best display of white flowers and is allegedly one of the most fragrant of the tea olives.  While ago, I snapped off a bloom of the orange and took it around to the white to compare.  Oddly enough, the white, just coming into bloom, had been fragrant a couple of days ago.  This afternoon, I couldn't catch any scent at all.  'Fudingzhu' has only been in the ground since last fall.  It's grown a few inches, but I imagine I'll get the full benefit in a couple of years.

In the meantime, I'm enjoying the wonderfully fragrant orange blooms.  These small flowers, which actually make quite a show now (but are so, so difficult to photograph) bloom along the stems. The aurantiacus is supposedly the most hardy of the tea olives, too, so it might work in a more northerly clime than the white blooming varieties.

So, first it was the gardenias (which are still blooming intermittently), then the ginger lilies in August - they have the loveliest scent of all to me - and now the tea olives.  Talking about fragrant plants reminds me that I need to replace a Daphne odora (February blooming) that died suddenly a few years ago.  If I work hard enough at it, I can have some fragrance (thinking now of getting a Chimonanthus praecox for December; the fragrant viburnums in March), I can pretty much have a sweet-scented garden just about all year round.

Note:  I'm leaving out several fragrant plants, but I'd better stop with just the above few for this post.