In defense of (some) vines 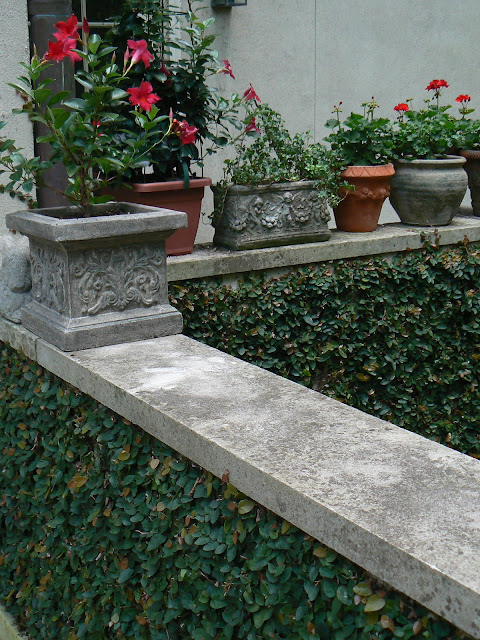 If I were to go into my attic (which would take a lot of courage), I would find amongst the Halloween costumes I saved up but never wore and the broken down Cabbage Patch Kids swing my daughter wouldn't let me throw away, a stack of Country Life magazines from England.  They were given to me by my friend Helen Fraser.

I thumbed through to find interesting articles, but I always read Christopher Lloyd's garden column (I did write a post about his coming to my house for dinner, and how the caterer wanted to impress him by attaching dyed carnations in pastel colors to the rack of lamb).

But mainly, I would study the real estate ads.  There were manor houses or country parsonages and such, with a rustic cottage thrown in here and there.  What interested me was why I was drawn to certain houses and not to others.

Finally, I figured it out.  The houses I liked best had roses clambering up the walls or Magnolia grandiflora (our American native) espaliered up two stories high or Boston ivy clinging to the facade or wings of the house.  After I realized this fact, I painstakingly went through the issues again and again to verify that it was the houses that had vines growing on them in one way or another that captured my fancy.

When I posted a photograph of the deciduous Boston ivy (Parthenocissus tricuspidata) growing on my house, I immediately was met with protests.  "Vines are destructive, will ruin a wall and harbor insects," said one respondent.

It's true.  English ivy, in particular, will cling hard to any surface and is hard as the dickens to get off.  If you do manage to extract it from its furious crawl, unsightly tendrils are left.  English ivy should not be allowed to grow up trees (guilty as charged; there are still many on my property that are festooned in the aggressive evergreen; I have freed many, but I have a lot of work to do).

Wisteria is another thug.  It will pull down an arbor in a heartbeat and entangle itself so fast in any shrub that you don't stand a chance once it's loose.  In late winter and early spring, when the hideous, velvety seed pods literally pop open, I try to find all the smooth dark brown seeds I can.  I collect them and put them in a trash bag, hoping they'll never see the light of day anywhere else.

But, I have to defend some vines.  I know having vines on your house is not for everybody, but it is for me.  Right now, the Boston ivy that was so beautiful most of the spring and summer looks terrible.  Also, I have some trumpet vines covering arched iron arbors, and if I'm not careful, they'll stick to the wall and start running up to the roof.  Still, I don't mind the hassle.

The photograph above was taken about four years ago before a hard freeze (it has to get below 14 degrees F.) fried the fig vine (Ficus pumila).  I knew perfectly well I was taking a chance on having the vine in such a prominent place (my back terrace).  What you see here comes from a story and a half down.  I was proud of the way it looked for many years, and then the cold came.  It killed it back in the open spaces.  Where it was protected, it remained green.

Right now, I'm growing it back and am hoping we won't have one of those knock-back freezes.  I will say that where I had to remove it, it doesn't look so bad.  And, I am quite positive that it doesn't attract insects.  What it does do is get out of hand, and it has to be snipped back several times during the growing season.

So, I'm taking a stand and obstinately growing the fig vine to cover the stucco wall in back.  I don't like vines everywhere.  If there are too many, it is suffocating.  But for my purposes, I like vines growing on a wall for softness and for a green backdrop.  In the spring, I hope to add (in another place on the side wings) a climbing rose.  I also want to dig up some Confederate jasmine which I planted on a stump.  Its tendrils are reaching way out into the air for something to cling to.  I'll move the vine up here so I can enjoy the fragrance in May.

Meanwhile, there must be some psychological reason I like vines so much.  I'll have to give that some serious thought, or maybe not.  It's just probably that I like the way vines look, and I hope there's nothing wrong with that.
Posted by Martha Smith Tate at 2:59 PM