I hope this is 'Fisherman' 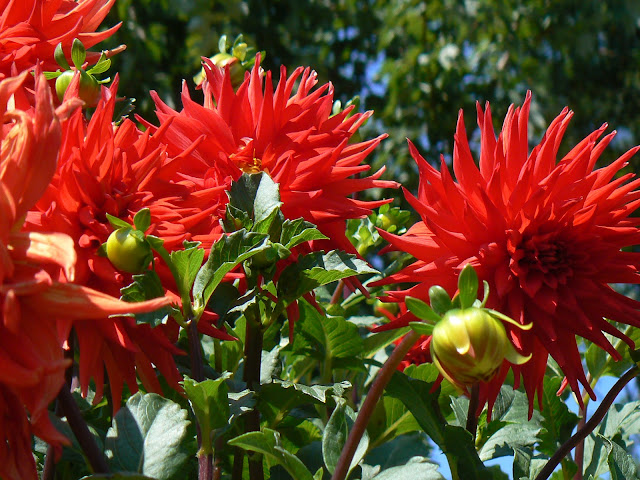 Since today is September 21, and I took this photograph a few years back on the same date, I thought it might be interesting to see what can be on display on the first day of fall.  The only catch is, the last time I posted a picture of a dahlia, I had the totally wrong name.  Luckily, John Kreiner of the Dahlia Society of Georgia saw it and e-mailed me immediately.  I was able to change the name, but only after a few dozen people probably caught my mistake.  He was so nice about it, and I was so embarrassed.  I mean, I put up a yellow dahlia and called it something it was not.  In fact, it wasn't even close.

I went on Google images and saw only one dahlia named 'Fisherman' that matched this one.  All the others so named looked totally different.  I'll be anxious to see if the dahlia experts will give me some help again.

Every time I've visited a dahlia grower, I've come away making a vow.  "In my next life, I'm going to specialize in dahlias," meaning really that I hope one day soon I can have a lot of dahlias in my garden. Dahlia growers are always taking flowers to hospitals and to friends, and I would love to be able to do that, too.  Plus, I need some colorful flowers to brighten up the House of Shabby Sheets, which has only white slipcovers (covered with sheets for dog relaxation) and brown floors.  It takes a lot of preparation and staking and fertilizing and choosing dahlias that do well in your area to be successful, so I'd better get busy preparing soil.

I remember going to Brian Killingsworth's garden.  It was almost time for a dahlia show, and he had rigged umbrellas to keep the sun and rain off some of the show flowers.  I might not ever go that far, but to see all those different shapes and sizes and colors - it set me afire.

So, perhaps by next May when it's time to set out tubers, I'll have that much-talked-about deer fence up, and I'll have the red dahlia above ready to go in the ground, along with the yellow one I called the wrong name.  If all goes well, please check back next September 21st to see if I have these same flowers in my dream garden.