How does this grass grow in shade? 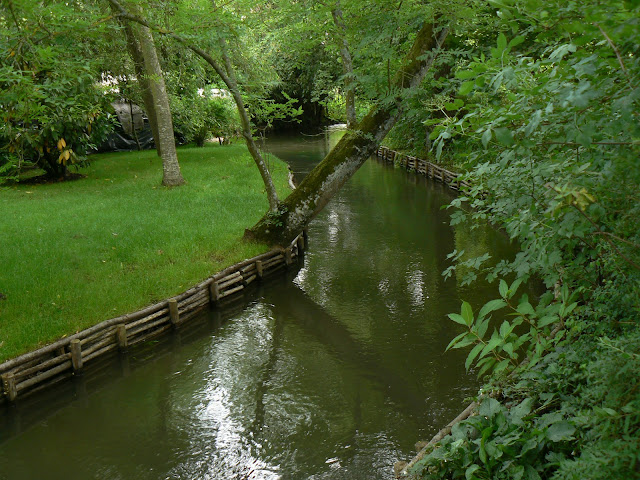 Up at the little house, I used to have a square patch of lawn.  I guess lawn would be too big a word.  It was an area about 16 ft. X 16 ft., bordered by bricks.  Every fall and spring, my husband would plant grass, fescue, I'm quite sure.  If I recall correctly, the grass would look pretty good in late fall, and then he would re-plant again in spring.  By summer, one could hardly call it a lawn.  It was more of a rock hard place with enough grass that, from a distance, made it look sort of green.

Once you got up to it, though, you could see it was spotty, at best.  Still, he had a push mower and would cut what was there and water it during dry spells.  At that time there were a lot more trees to provide shade.  I'm thinking the lack of light, plus the poor soil made the small space inhospitable to grass.

Fast forward to now.  My heart races every time I go up there and look at the hard-pack, almost brick like surface.  There are a few weeds and some moss, but now I'm tempted to see if I can get a pick into the earth, try to dig it up and then get a ton of soil amendments in there so I can plant some grass.  Don't I hear on Walter Reeves' radio show a million questions about growing grass in shade?  And, doesn't he say there is a type of fescue now that tolerates shade?

Because the house blocks some of the sun, I'm not sure how the corners would do.  But now, with some trees gone, it gets a lot more light.  I would love to have just one little patch of grass again, although it would entail buying a push mower if I could actually get any to grow.

Which brings me to the above photograph.  That grass on the left hand side appears to be pretty thick, despite the shade.  It looks like a place for one of Renoir's picnics (although this is in Monet's garden at Giverny).   Of course, anything would look good next to that peaceful canal.  The water flows into the famous pond with the water lilies and the arched, wisteria covered bridge.

If the weather turns cool again next week, I think I'll take my pick axe and go up there and see what I can do.  I haven't checked out Walter's Web site, but I feel sure he has all the information on there I'll need.  I know I have to get some straw and a new sprinkler.  If I get up the gumption to do this, I'll report back in a month.  I hope deer don't eat new grass shoots.  They do stand on the intended "lawn" and nibble at the 'Snowflake' oakleaf hydrangeas, however.  This should be an interesting experiment.  I hope it won't be an expensive one.
Posted by Martha Smith Tate at 4:20 PM