Cheerful flowers do the trick 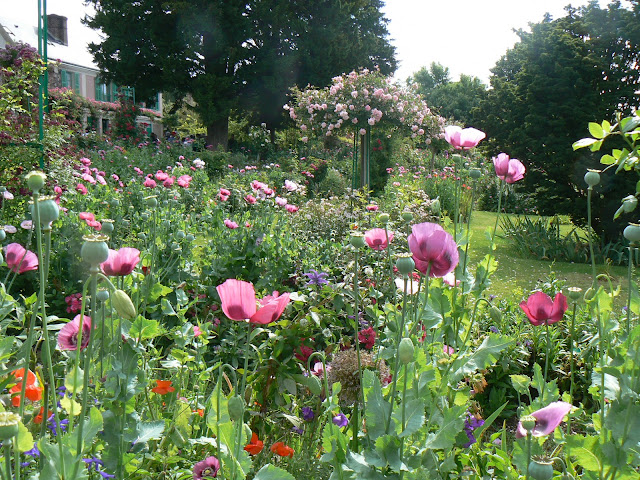 Is it the heavy air outside, the gray skies, the mosquitoes?  I know cooler days are coming.  It's in the seven day forecast.  But, for some reason I needed to see something cheery today.  All day I felt sort of gloomy (maybe it was because I had to clean the house and wanted to be doing something - anything -else).

So, I scrolled through some photographs and came upon this view of Monet's Giverny that I don't think I've posted yet.  When I began examining the flowers, I realized it won't be long before it's time to scatter the poppy seeds I've saved.  I marked the flowers at the farm I wanted to preserve last June.  Most of the blooms were double and cherry red, but there was one flower that was almost purple.  I'll have to wait until next May to know if my selections worked.

Poppies remind me of zinnias.  You never know what you're going to get from last year's seeds, and I don't know if selecting only the ones you want always works.  Mother had a patch of cherry red peony poppies that went on for years.  I don't remember seeing the single pink ones that seem to be dominant if you let everything go for years.

Earlier in the week (or was it last week?), Diana Mendes posted pictures of her garden.  It set me afire.  I need flowers.  I dream about having flowers and have for years.  So, it's time to get aggressive and figure out how to get this deer problem solved. They've eaten practically everything (just saw they'd mowed down the crossvine I planted in the spring).  The good news is that the Aster tataricus still has buds.  They clipped them all last year.  The pink daisy chrysanthemums have been sheered again, but I'm hoping I'll have a few buds.

But, back to the poppies.  They do best when you prepare the soil and smooth it over.  That means no grass or weeds, just good, bare ground.  Ruth Mitchell, poppy expert, would put the tiny seeds in the palm of her hand and blow them out onto the ground.  It seems like a long time until next spring, but getting everything ready will definitely pay off later.  Poppies make such a great show, it's worth the effort.
Posted by Martha Smith Tate at 5:20 PM