The Parc de Bagatelle - where I didn't get to go 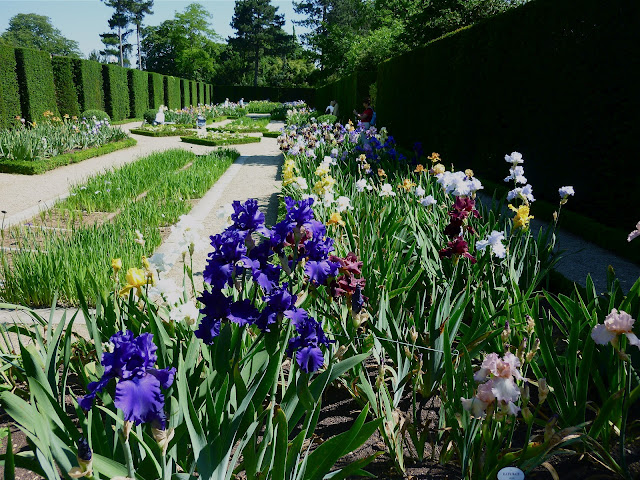 First of all, I want to give credit where credit is due.  My friend Carol Tessier, who lives right outside Paris, took this photograph in the Parc de Bagatelle in the Bois de Boulogne.  I think I mentioned earlier that I never made it there when we went to Paris in June, so I was glad that Luc and Carol had been and had taken a camera along.

Thinking back, the last time I was even in the Bois de Boulogne was in the summer of 1968.  A French friend took me to the Bagatelle and then to the Racing Club de France, also in the Bois.  That was the year of the roundtable negotiations for the Vietnam War.  My sorority sister and her family were living there because her father, Cyrus Vance, later Secretary of State, was one of the negotiators.  At the Racing Club we saw Sargent and Eunice Kennedy Shriver (sister of President John F. Kennedy).  Mr. Shriver was the ambassador to France, so it was quite a thrill.

Sorry to digress so; I just remembered about being in the Bois.  So, it has been a wish of mine to go back to this beautiful park, especially now that I'm so interested in flowers and landscaping.  The Bagatelle is most famous for its 1,200 varieties of roses.  The parc dates back to 1777, when it was first opened to the public.  Marie Antionette had made a bet with the Count d'Artois, who had purchased the land, that he would not be able to establish a garden in 64 days.  The queen lost the bet.

Not to go into any more of the history (the Bagatelle changed over the years), but if you're in Paris from mid-May to mid-June, you'll hit the peak of roses, peonies and iris.  This time of year, dahlias are on display.  My dream is to return to the Bois de Boulogne, go out in a little rowboat on one of the lakes and then walk under the rose-covered arches in the Parc de Bagatelle.  I think I'll appreciate being there a lot more than I did so long ago at age 22.
Posted by Martha Smith Tate at 4:21 PM