The month was June, but where was I? 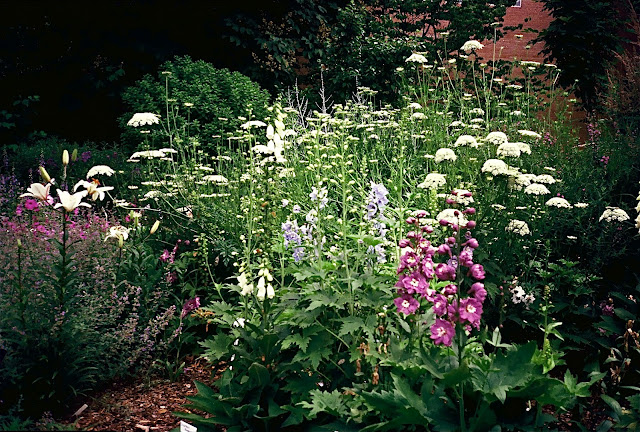 Here's something I used to be bad about - not taking the time to identify the year and place I took a photograph.  This was a slide I had converted to digital, so I know it was a good many years ago.  Nowadays, it's much easier to keep up with photographs on a computer, although I'm still guilty of taking 50 pictures at a time and then not labeling each one.

So, when I need to find a photograph of a certain flower, I can't type it in and have it pop up.  I could work backwards and do this, but with (ulp!) over 18,000 pictures in this computer, the task is daunting.  Still, I think, if I did ten a day, that would be something.

If the above scene was in Georgia, I can say with some certainty that the month was June.  That's when Asiatic lilies bloom here (or at least they used to; everything is moved up by at least two weeks now).  And, if anyone planted delphiniums in the fall, they would also flower in June.  Ditto Queen Anne's lace.  I can spot a foxglove that has pretty much bloomed out, so that would be another clue as to the timing of the shot.

Right down in the front, center left, there appears to be a marker of some kind.  Could I have taken this on the Georgia Perennial Plant Association's tour?  Possibly.  Or, did I take it where delphiniums would more likely be perennial, like in Colorado?  We can have them here, but we pretty much have to treat them as cool season annuals, meaning plants can be put in during the fall and will bloom in late spring.   I had one come back the second year, but delphiniums generally can't tolerate our heat and humidity.

I've racked my brain, trying to remember where I was when I took this picture.  It really doesn't matter, but it reminds me that I need to be more careful, especially when I want to know the name of a particular flower.  I always think I'll remember, but I hardly ever do.
Posted by Martha Smith Tate at 1:10 PM