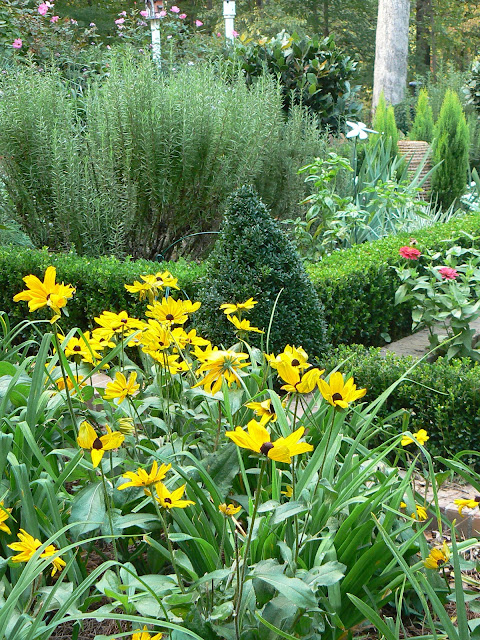 During all those years I wrote for the Atlanta Journal and Constitution, August was a tough time.  One, no one wanted to let you into his or her garden, especially if we had been suffering from a drought.  And two, most people around these parts plant for April, May and June, which are almost "you can't miss" months. In addition, most nurseries were either closed or had limited stock due to the heat and its not being a particularly good time to plant.

But, as I look out the window next to my piano,  I can see the exact flowers pictured above - Rudbeckia 'Indian Summer' - a good black-eyed Susan for mid-August and great for cutting.  Granted, I don't have the cone shaped boxwood or a nice hedge or a stand of rosemary and some colorful zinnias to complete the scene.  I'm just grateful to see several of the outsized yellow flowers with the dark center, since the deer have taken a liking to them.  I'm surprised at this latter fact, as the foliage is very fuzzy.  I think the critters are pretty desperate right now, given the lack of rain.

I've seen these exact flowers or the smaller Rudbeckia hirta planted en masse next to maroon elephant ears.  This is usually a commercial planting or maybe a combination for the entrance to a subdivision.  But I like what this gardener has done here.   She's plugged in a bright spot of color from a rustic plant and backed it with plenty of green, some of it in a formal pattern.  I like the contrast.

Many times (in fact, most of the time), I analyze vignettes in gardens and try to figure out why I like a particular combination.  In this case, various textures of green and the summer flower colors work well together.  It's also the rustic vs. the formal that gives the picture personality.

Tomorrow, I will know if a special rudbeckia that my mother had for at least four decades, has survived the drought.  I never knew what the flower was until we made an episode of A Gardener's Diary at Susan Felts' garden outside Nashville, Tennessee.  She had it, too, and was able to identify it as a rudbeckia.  It's the only time I've seen the plant - it's very tall, has super double yellow flowers (no dark center) and shoots up from clumps of basal foliage.  Hummingbirds love it.

I wish I had written down the name of who gave it to Mother.  Chances are, they're all gone now, but it would be nice to know.  Now that I have some sun, I need to bring some of this special rudbeckia up here.  Eventually, I'd like to be able to share it.  Mother and Daddy got so much pleasure watching the butterflies and hummingbirds hover around the flowers.  And there was usually a bouquet on the table in August, along with zinnias and orange cosmos and bounty from the garden - sliced red tomatoes and light green banana peppers, squash, black-eyed peas and so on.

One word about 'Indian Summer'.  This is the first year the plant has spread and come true from seed.  I guess the winter was so mild that this flower, which is usually treated as an annual,  came back and multiplied.  Just another nice surprise from the garden.  You never know.
Posted by Martha Smith Tate at 4:16 PM