An American in Paris (with a Japanese friend) 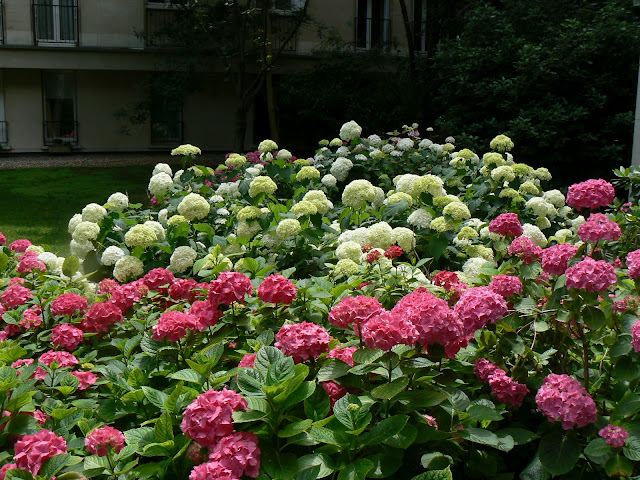 Once, I heard a lecturer say that if it weren't for Japan and China, the state of Georgia would not be a very pretty place.  At the time, a gasp went up in the room.  I think the statement seemed blasphemous to several people in the audience.

If you think about it, though, so many of the azaleas we plant are from Japan.  Camellias, too.  Most all of the colored hydrangeas are Japanese in origin.  We have many native lilies, but the Asiatic and Oriental lilies are always good for a show in the garden.  Many roses we love come from China, and then there are the much beloved cherry trees which are a highlight of every spring, along with the big snowball viburnums.  I could go on and on.

I do like the attitude of the esteemed nurseryman Don Shadow from Winchester, Tennessee.  He doesn't care where a plant is from.  It's the beauty and joy plants provide that matters to him.

For some reason, I am always interested in the provenance of a plant.  If I see something new, I usually try to find out where it came from.  It's fascinating, for example, that dahlias are a New World plant.  And many of our natives are popular in Europe and Japan.

I took the above photograph at an apartment house in St. Germain-des-Pres, on the left bank in Paris.  Private gardens are rare in Paris, but this one was huge - a big green space surrounded on all sides by tall buildings.  I was amused when I saw that the pink mophead hydrangeas, which would have had their origin in Japan (although we say "French hydrangeas" because so many were hybridized there), were paired with the white Hydrangea arborescens 'Annabelle', which was discovered in the town of Anna, Illinois.

Tara Dillard posted a photograph I liked even better.  It showed an all-American scene in Provence.  An oakleaf hydrangea found originally in northern Alabama (Hydrangea quercifolia 'Snowflake') was growing next to a lovely stand of 'Annabelle' hydrangeas.  The backdrop was an ancient house in a village.

I think I was going somewhere else when I started writing this, but suffice it to say that beauty from flowers can come from anywhere.  On that June day in Paris, I appreciated the origins of both of these hydrangeas, but I was especially proud of seeing that beautiful American in Paris.