Remembering the Fourth of July 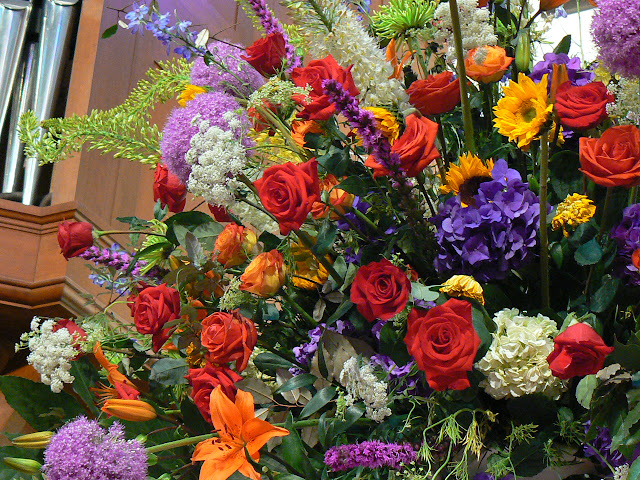 Every year at our Methodist church in Atlanta, we have what we call "Celebration of Freedom" Sunday.  The service starts with the National Hymn, God of our Fathers, as the processional (I pride myself in knowing all four verses, learned in the small town Baptist church of my childhood).  Now that I think about it, I believe they've changed the title in our updated hymnbook to God of the Ages.

At any rate, I always get chills and sing alto way too loud (anything above a whisper was too loud according to my two daughters).  In our service, we also sing My Country 'Tis of Thee, Eternal Father Strong to Save (the men of the choir sing this), the Star Spangled Banner and America the Beautiful.   After the benediction, everyone sings Irving Berlin's God Bless America (I sing too loud on this, too).  For the postlude, Scott, our choirmaster, gives a lively rendition of John Philip Sousa's Stars and Stripes Forever.

But, the highlight of the service is the Veterans Parade.  All people who have served in the U.S. Armed Forces are invited to march down the aisle as the choir sings the Battle Hymn of the Republic.  By the time the music starts slowing down in preparation for the verse that starts, "In the beauty of the lily....", I've already used up several tissues.  Seeing those men and women coming down the aisle, the last ones usually walking more slowly or in wheelchairs, I am practically sobbing.

I wasn't here for this year's service, but since today is the Fourth of July, I think I'll get out the (um..borrowed) Methodist hymnal and play all the songs on the piano.  I won't be singing, but I'll be remembering lots of happy Fourth of July celebrations, especially those of my childhood.

There was one year, though, that I was pretty miserable.  I should have known then that I would turn into a chronic worrier.  My family had a cabin on a lake where we always spent the Fourth of July.  We would have grilled hot dogs and hamburgers and pass the day swimming or fishing (I didn't do much of the latter, but Daddy did) or riding around in a boat.

I don't know how old I was, but one year Daddy decided to keep our watermelon cool by putting it under a waterfall on the other side of the lake.  I was so worried that someone would steal the watermelon that I spent the entire day guarding it, missing all the fun.

All this has nothing to do with the photograph above.  This is an arrangement my Flower Guild team did for one of our Celebration of Freedom Sundays.  We have always avoided straight red, white and blue, but instead have used summer colors that evoke the season.  Let's see if I can name most of the flowers:  'Freedom' roses are the red ones, orange Asiatic lilies, lavender colored allium, violet hued liatris, white and purple macrophylla hydrangeas, white Queen Anne's lace, light blue delphiniums, green spider chrysanthemums, golden sunflowers and yellow and white foxtail lilies.