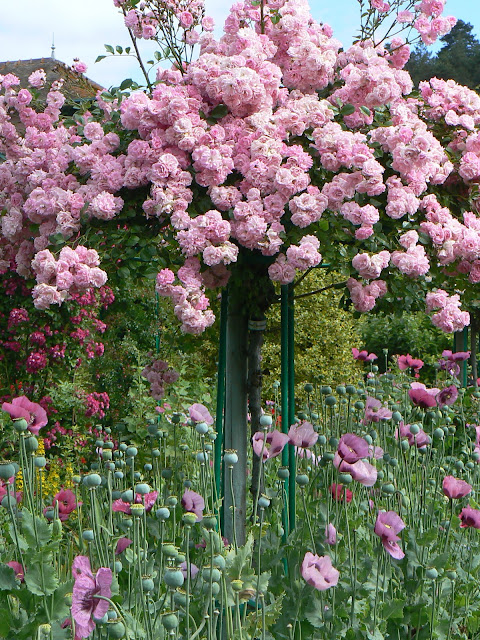 Back in the 1980's, when interest in ornamental gardening was at its peak in the U.S., I would see metal tuteurs like the ones that hold Giverny's climbers for sale in catalogs.  Maybe I'm not looking in the right places, but I haven't seen them offered in recent years.  Basically, there were, in addition to arches, two kinds available.  One was a tall, semi-obelisk (which I bought - wish I'd gotten two); the other was in the shape of an umbrella.  I'm thinking the rose in the above photograph is trained onto one of the latter.

I'm wondering.  I have a book with old photographs of Giverny.  One shows Monet's head gardener, Felix Breuil, deadheading a rose in the same location I took the above picture.  The rose appears to be growing on an identical tuteur.  The photograph, which is not dated, shows irises in full bloom.  I missed the peak of the season for roses, and all the irises were gone, so the above rose must be a late bloomer.  I think I caught it just in time.

From what I've observed, Americans seem less likely to use structures to add height to their gardens.  This is a total generalization, and I can think of dozens of exceptions, but you just don't see very many scenes like the one above.  Elsewhere in Giverny, there are iron structures that hold clematis high above the rest of the cottage-type garden.  One period photograph shows rows and rows of upright iron posts, crisscrossed at the top with perpendicular bars.  Each is festooned with Clematis montana 'Alba'.  These supports still exist, but I don't think there are as many now.

At any rate, no one much here is thinking about anything but keeping plants alive.  But, when the weather cools off, it would nice to plan for more tuteurs and climbing plants to add to existing beds.  I'll keep looking out for sturdy ones for sale.  If not, I might need to learn how to become a welder so I can make my own.  I do have plenty of bamboo for some temporary ones, but since time seems to pass so quickly, and given the vagaries of weather, I'd like something a little more permanent.