Some poppies at Giverny 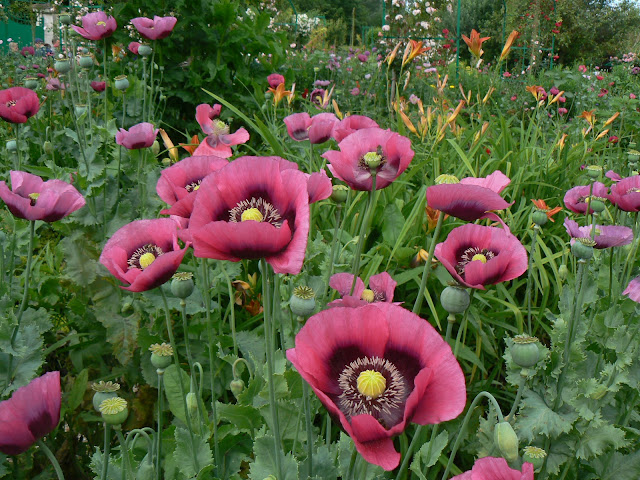 I'm sitting in the dark at the moment, watching a bateau mouche on the Seine, its lights making the apartments below the towers of Notre Dame look quite spectacular.  Oops.  The lights have passed now.

My friend and I are renting a 5th floor apartment at the top end of the Ile St. Louis in Paris.  I am looking over at Notre Dame from the window where I sit typing this.  The Eiffel Tower is lit tonight, but it hasn't done the light show yet.  It's 10:19 p.m., and it is twilight.  It's hard to go to bed until it gets dark around 11 p.m.

I went to Giverny on Friday.  It was a bright, sunny day, and I pretty much over-exposed all the pictures.  Plus, half the world was there.  We thought we were smart to take the 8:13 train, but all the tours got up early, too.

The flower situation was mixed.  I had caught the bearded irises at their peak when I was here in 2006. Right now, there are lots of poppies (the ones above were so unusual that it looks like I've doctored the photograph), and still some roses hanging on.  Even though I took over 300 photographs, I did not get all that many good ones.  I was disappointed.

However, wouldn't it be great to have the seeds from poppy pictured above?  I wonder if they would come true.

Today was a disappointment - one of those day trips where everything goes wrong.  I will only say that I mistakenly used the four expensive RER train tickets we bought to visit Barbizon by mistake yesterday in the regular Metro.  You can imagine how much sympathy I got from the woman at the guichet today when I explained what I had done.  Had to buy four more tickets to go to Barbizon - a lovely little village, but no gardens to see.  Don't ever think there's an inexpensive bus to take you there from Melun.  There isn't.  I could have bought myself a new raincoat for the money we wasted on taxis.

So, I'll be hoping to take more pictures of worthy landscape ideas.  So far, the hollyhocks everywhere win the prize.  More from Paris later.  I have to say the postings will be sporadic this week, as I'm borrowing a computer, and I can't figure out how to turn on the lights in this room.

The towers of Notre Dame are lit, as is the Hotel de Ville in back of me.  The Eiffel Tower isn't sparkling (I have to get up out of my chair to see that), but it is still beautiful.  It's just about dark now, faster than I thought, so I say good night from Paris.
Posted by Martha Smith Tate at 1:44 PM