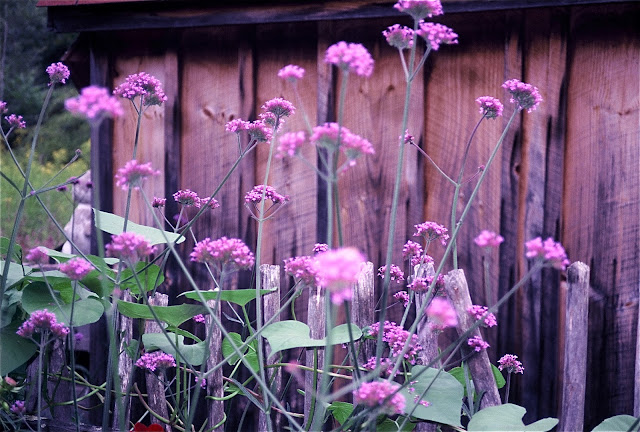 As you can see in the above photograph, I was trying to be artistic.  I hope you'll ignore the fact that I didn't quite succeed.  The idea was good, but the execution was not.  But this photograph is actually just an excuse to talk about Verbena bonariensis, a flower that will grow in a lot of places.  In fact, it grows too well in some parts of this country and on other continents where it has been outlawed.

But, here in the southeastern U.S., this Brazilian native is fairly tame.  It will re-seed, and although it will form colonies, it is not likely to be a problem.  In fact, it is a good addition to the summer flower border and a good cut flower.

I took this photograph - actually it was a slide I had transferred to digital - in upstate New York.  The crew from A Gardener's Diary had traveled to the Catskills near Woodstock.  We arrived there during one of the worst droughts I've ever seen.  The normally green, lush trees in the mountains were brown and crispy, and the fields were yellow and dry.  The three gardens we taped were mercifully small, so that the owners were able to keep them looking good, despite the fact that it was August and there hadn't been any rain to speak of for months.

The above photograph was taken in Dean Riddle's garden.  Dean was a garden designer and also a garden writer for some very prestigious magazines.  I had already been there to scout in April, and I remember looking at the two small square plots of dirt next to his rustic house and thinking, "How is this going to work?"  My younger daughter, who was in boarding school in New Hampshire at the time, went with me on the trip.  I took her along because Dean helped Kate Pierson of the B-52's in her garden.  My daughter was thrilled.  She was now in the 10th grade, but in the third grade, she had dressed as Kate Pierson for Halloween.  This time, she got to try on one of Kate's red wigs (even bigger than the one that had weighed her down in elementary school).  We came away with autographed albums and rocks from Kate's yard as souvenirs.

But back to the Verbena bonariensis and Dean's garden.  When we arrived the second week of August for the taping (we did Kate's garden, too), I couldn't believe my eyes.  Those two empty plots had turned into a lush riot of colorful flowers.  Most everything had been grown from seed or had re-seeded.  Verbena bonariensis was among the latter.

Just yesterday, I went to a fabulous country garden I hadn't known about before, and the gardeners had some V. bonariensis mixed in their huge borders.  I am still fretting over the fact that I didn't have my camera with me.  My IPhone pictures did not do it justice.  But that will be a story for another day.  It's one of those gardens you need to visit often.  I'm astounded it's been there all this time, practically under my nose.  I can't wait to go back.