My hydrangea is bigger than your hydrangea 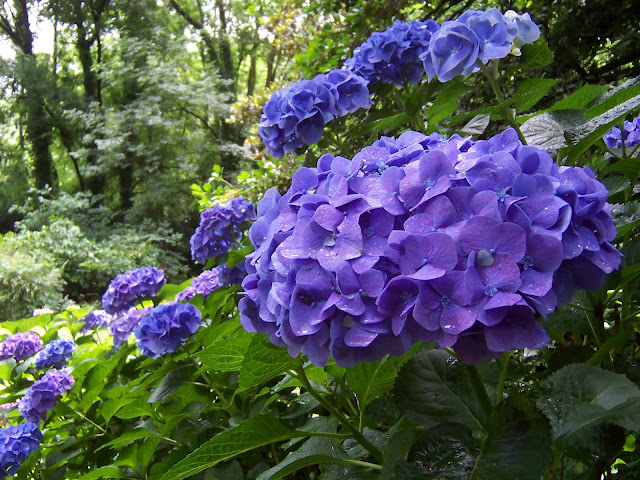 Last Saturday morning, Kathryn MacDougald and I went over to Amy Linton's house for a tour of her garden.  Amy is special to Kathryn and me, not only as a fascinating, talented, nice friend, but because she was one of our two editors of A Gardener's Diary on Home & Garden Television.  It doesn't hurt that she's so kind to your animals and children and always asks after them.

Kathryn and I walked down the driveway, admired a light blue hydrangea with one pink bloom, and commented on every ground cover and plant Amy and her husband Gregg showed us (he's also talented - a well-known sound technician for films)   Kathryn had given them a lot of plants through the years, and it was fun to see that they were faring so well in their new home.

But then, we rounded a corner, and I promise you, my heart about stopped.  There in front of us was  the largest hydrangea I've ever seen - both the plant and the extraordinary blooms, which ranged from true blue to purple.  We couldn't believe it.  I made Kathryn put her head up against one of the blooms.  Not that Kathryn has an outsized head, but I'd say it's normal size.  The blossom you see in the foreground dwarfed Kathryn's entire head.  It was amazing.

I couldn't take pictures fast enough, but the sun was out bright and the light was dappled, and I couldn't get the true colors.  Nor, could I get a good perspective on the size of the plant itself, which seemed to go on forever.

So, when Amy posted this beautiful photograph on Facebook, I asked permission to use it for the blog.  The credit goes to the owner of the hydrangea, Amy Linton.

But, there's more to the story.  In September 2009, it rained in Atlanta for an entire week.  Homes that had never flooded and weren't even in a flood plain floated away.  It was disastrous.  Amy and Gregg went out onto their porch and looked down at what had been their beautiful yard.  There was a lake there, instead.  Amy sent me a photograph, showing this very hydrangea bush, underwater, so that you could only see a few inches of the top of the plant.  Unbelievable.

A word more about Amy.  It would take an entire page to list her accolades for editing.  Briefly, she has edited numerous award-winning documentaries and feature films.  She and Peter Miller, a documentarian who produced several of Ken Burns' films, are the principals in Willow Pond Films. One of the films she edited, Julie Dash's Daughters of the Dust, was a Sundance winner and selected for the Library of Congress' National Film Registry.  A documentary she edited and Peter produced, The Internationale, was short-listed for an Academy Award.  Jews and Baseball: A Love Story, a collaboration by Amy and Peter, captured the award for best editing  at the Breckenridge Festival of Film.

Here's what Amy had to say on Facebook about her hydrangea:  "Best year ever for these hydrangeas.  Everything aligned, weather and water-wise, just perfectly!"