The lowly liriope gets some class 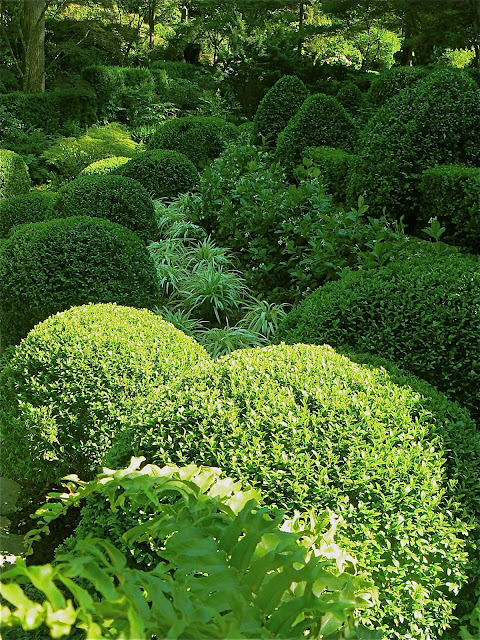 It's about to turn really hot here in Georgia.  It's also dry.  At the farm, the ground is cracked, and the crops are stunted.  Anything around here, especially plants in containers, has to be watered almost daily.

The interesting thing to me about this plant composition is that right there in the middle is an attractive variegated form of liriope.

If you live up north, you probably don't depend on this grass-like plant like we do.  There was a landscape company that for years used liriope extensively in their designs.  In fact, I could ride around Atlanta and tell you which yards this very successful firm had done.  The tell-tale signs were weeping yaupon hollies by the front door, and, seemingly always,  a crape myrtle rising out of a mass of liriope.  There's no arguing that it's an easy care plant (it does need to be cut back in late winter to let the new foliage come up, although it's not necessary.  The present year's growth will cover the scraggly leaves from the previous year).

In recent years, an all-white form has been introduced, as well as one with chartreuse leaves.  There are also some great looking variegated plants which can lighten up a corner in shade.  In the photograph above, Bill Hudgins inserted white-striped liriope as a ground cover where bulbs had been.  The grassy leaves serve as a good texture contrast with the boxwoods.

One story about liriope.  It was everywhere when I moved to this property almost 40 years ago.  I decided I wanted to remove a good portion of it, as it had spread to areas where I wanted to plant other things.  I worked diligently to dig up huge clumps.  It was hard labor.  Once I had the plants dug, I pitched them into a large pile over next to the woods and forgot about them.

The next year, I was walking past where I had discarded the liriope.  My first thought was, "I didn't know there was any liriope over here."  Then I realized what had happened.  Every one of the clumps had rooted.  At one point, there was even a liriope "mountain", where I had piled the plants on top of each other.  They were doing just fine.

I'm a little kinder now towards the plant.  It has a lot of uses.  But, I still don't like that crape myrtle coming out of a sea of liriope.  That just never has looked good to me.